Direct updates from round nine of the season at Daytona International Speedway.

Follow the 2022 Monster Energy Supercross Championship with direct updates from round nine of the season at Daytona International Speedway in Daytona, FL through Racefeed. 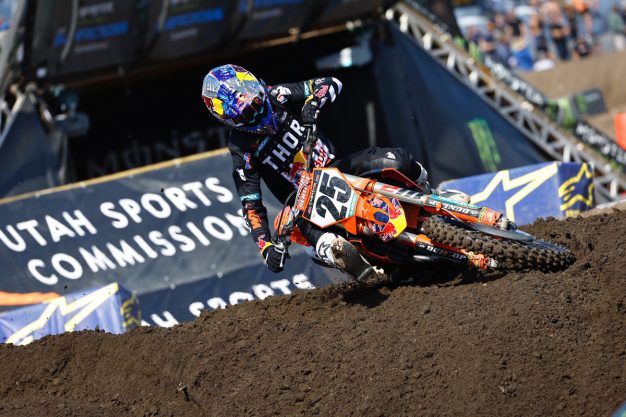 250SX heat one:
Rockstar Energy Husqvarna’s RJ Hampshire opened the night’s 250SX proceedings with the holeshot ahead of Jordon Smith (Fire Power Honda) and Cameron McAdoo (Monster Energy Pro Circuit Kawasaki). Smith piled the pressure on Hampshire early in on, before taking the lead through the rollers, before Hampshire struck back. McAdoo moved into second and set his sights on Hampshire. Smith retaliated and forced McAdoo high on a turn to retake second position, holding off the Kawasaki rider until the finish. Hampshire took a hard-fought victory with Smith and McAdoo rounding out the podium. Muc-Off FXR ClubMX Yamaha riders Nicoletti and Owen finished fourth and fifth with solid performances. Cullin Park (Phoenix Racing Honda), John Short (Honda), Jarett Frye (Fire Power Honda), and Grant Harlan (Honda) all qualified for the Main.

250SX heat two:
Rockstar Husqvarna’s Stilez Robertson took the holeshot with Mitchell Oldenburg (SmarTop Bullfrog Spas MotoConcepts Honda) second and Enzo Lopes (Muc-Off FXR ClubMX Yamaha). Team Honda HRC’s Jett Lawrence clawed his way back up to second early on the opening lap. Lawrence closed the gap on Robertson and the pair traded the lead several times in the space of half a lap, before the Australian took the lead entering the sand section. Pierce Brown (TLD Red Bull KTM) mounted an attack on Lopes in the closing laps and took over the third-place spot. Up front, Lawrence quickly pulled a gap on Robertson, ultimately finishing with a four-second lead by the time they crossed the finish line. Brown rounded out the top three, with Oldenburg and Lopes finishing fourth and fifth respectively. Lance Kobusch (Honda) , Kyle Peters (Phoenix Racing Honda), Jack Chambers (KTM) and Henry Miller (KTM) finished out the top nine.

250SX LCQ:
Kawasaki rider Hunter Sayles enjoyed a great jump off the gate in the first Last-Chance Qualifier, followed closely by Hardy Munoz (Kawasaki) who took over the lead several corners later. Sayles soon found himself quickly outside the qualifying positions after getting passed by Brock Papi (Kawasaki), Derek Drake (BarX Chaparral Ecstar Suzuki) and Josh Varize (Husqvarna). Munoz managed to hold onto his lead until the checkered flag, closely followed by Varize. Papi and Drake rounded out the qualifiers for the Main event.

450SX LCQ:
Tristan Lane (KTM) claimed the holeshot, with Justin Bogle (Twisted Tea HEP Motorsports Suzuki), Ryan Breece (Yamaha) and Cade Clason (SGB Racing Storm Lake Honda) in hot pursuit. Bogle quickly got to the front, as Marchbanks charged through the pack from a mediocre start in his 450SX debut. Marchbanks clicked off passes on Clason, Lane and Breece to finish the LCQ in second position, five seconds behind the winner, Bogle. Breece and Clason also qualified for the 450SX Main event.

250SX Main event:
Stilez Robertson enjoyed a blinding start to claim the holeshot in the 250SX East main event, but two corners later Lawrence took the lead and was never headed from there. Nicoletti had a great start in third and Enzo Lopes. Hampshire rounded out the top five with the first lap in the books, but came up short on a triple and tumbled down the leaderboard to eighth. Cameron McAdoo had an average start and finished the first lap in seventh, and then struggled to get past Pierce Brown for fifth. Slightly ahead of them, team-mates Lopes and Nicoletti traded places several times for the podium spot, before Lopes eventually took the spot. While that was going on, McAdoo found himself in the sights of Hampshire, who was clawing his way back from his earlier crash. The Brown-McAdoo-Hampshire train caught and passed Nicoletti and Lopes with less than five minutes left on the clock, before Hampshire and McAdoo commenced a furious battle where they traded positions several times. McAdoo dispatched of Hampshire then upped the intensity, finally finding his way past Brown for third with three laps remaining. Up front, Lawrence cruised to an extremely comfortable 14-second wire-to-wire victory, over Robertson, with McAdoo another five seconds adrift in third. Brown and Lopes rounded out the top five. Jordon Smith, Hampshire, Nicoletti, Oldenburg and Varize completed the top 10 positions.

450SX Main event:
Cooper Webb repeated his starting performance with a great holeshot, before Anderson and Stewart found each other entering the sand and they both hit the dirt, remounting well down the field. Up front, Webb led over Sexton and Tomac, with Barcia and Ferrandis rounding out the top five as the technical track continued to deteriorate. At the eight-minute mark, and with Webb quietly stretching out a three-second lead, Tomac suddenly upped the ante and passed Sexton for second, before setting off after Webb. Further back, Marvin Musquin and Ken Roczen tussled for sixth, with Musquin ultimately gaining the upper hand. Tomac relentlessly closed the gap on Webb as the clock ran down and lapped riders began to come into play. With just three minutes left on the clock Tomac’s bike began overheating, but when Webb was held up by lapper Shane McElrath in the whoops, Tomac pounced and took the lead. The championship points leader continued to charge right to the end, as he made history by becoming the first racer to win six Daytona supercross races. Webb finished second and Sexton third, with Ferrandis and Barcia rounded out the top five. Musquin, Stewart, Roczen, Anderson and Wilson completed the top 10.