Vohland to gather second opinion after crashing out

Initial X-rays indicated that nothing was broken at Minneapolis. 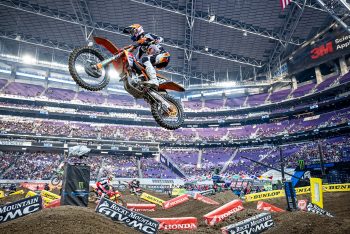 Max Vohland was left unable to complete Minneapolis’ 250SX East main event after crashing out in the first turn, now seeking a second opinion after initial X-rays indicated nothing was broken after being run over by multiple bikes following the fall.

Vohland entered the 2022 season off the back of a shortened 250SX campaign last year, where he secured three improving top 10 results at Houston before suffering a season-ending fall at Indianapolis.

The 18-year-old qualified 14th in the weekend’s opening round before finishing seventh in heat one, the Red Bull KTM Factory Racing rider later having his night cut short due to the opening lap incident. Initial scans didn’t reveal any broken bones.

“In the main event, Vohland got off to a mid-pack start and he ended up going down in the first turn, with multiple riders hitting him while on the ground,” KTM’s post-race release detailed. “Banged up, Vohland made the decision to get checked out by the medical staff on-site, ending his race before the completion of the first lap. The initial X-ray did not show any broken bones, but Vohland plans to get a second opinion when he returns home this week.”

A return date to racing is expected to be confirmed after the severity of Vohland’s injuries are determined, however, the incident marks a damaging blow to the 250 SX-F rider’s championship aspirations, with experience crucial at this point of his career.