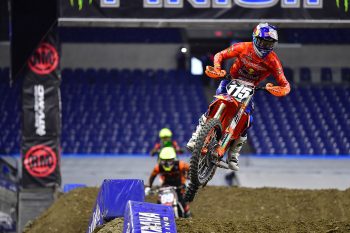 Red Bull KTM rookie Max Vohland has been cleared of any bone damage after dislocating his hip in qualifying at Indianapolis 1, released from hospital on Saturday night and now on the road to recovery.

The 17-year-old posted the seventh-fastest lap-time before crashing in the whoops during the second timed practice session, prompting a red flag and ending his night altogether.

“Team rider Maximus Vohland was unable to line up for Saturday’s night program after suffering a practice crash earlier in the day,” an update from KTM stated. “The rookie secured a strong seventh-place qualifying position in the 250SX East division before getting transported to the local hospital where doctors confirmed that he has sustained a dislocated hip.

“Fortunately for Vohland, the X-Ray showed no bone damage and doctors were able to perform a ‘closed reduction’ to put his hip back in place, allowing him to be released from hospital on Saturday evening.”

It’s unclear when Vohland will be able to return with Indy 2 set to take place on Tuesday, with the third stop at Lucas Oil Stadium scheduled for Saturday. He’d been gradually on the rise in his first three Monster Energy Supercross appearances in Houston, recording 9-8-6 finishes in 250SX East.