Four-rider line-up of Roczen, Sexton and the Lawrences returning. 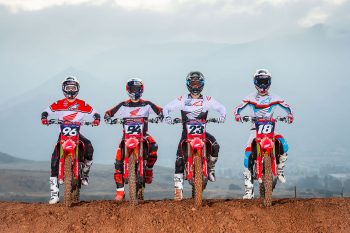 Roczen, 27, will enter his sixth year as a Honda rider and approaches the upcoming season off the back of his most successful year with the brand – second in Supercross and third in Pro Motocross.

Scoring multiple podiums in indoors and outdoors this year, Sexton enters his second full season with the team set to contend for both 450SX and 450MX championships.

Next year will see the Lawrences effectively trade regions, with Hunter set to compete in 250SX East and Jett returning to 250SX West. Both experienced a successful 2021 campaign, Jett winning the 250MX crown along with three 250SX East races, while Hunter was third in 250MX and second in 250SX West after winning Arlington 2.

With the rider line-up remaining the same for the upcoming season, several personnel changes have occurred at Team Honda HRC. Notably, Lars Lindstrom will take over as team manager, while Shane Drew will fill Lindstrom’s position as 450 crew chief and Grant Hutcheson has been brought in as 250 class crew chief.