One of the highly-anticipated off-season moves now made official. 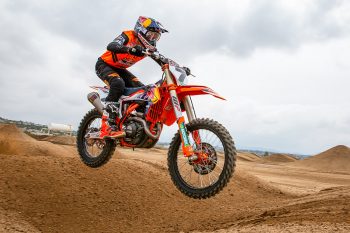 Red Bull KTM Factory Racing has finally confirmed the signing of Aaron Plessinger for the 2022 and 2023 seasons, set to join Cooper Webb, Marvin Musquin and Max Vohland in an expanded four-rider roster.

Plessinger and Webb will contest both Monster Energy Supercross and Lucas Oil Pro Motocross, while it was previously announced that Musquin has signed a Supercross-only contract. Vohland is the sole 250 team rider.

The arrival of Plessinger has been widely tipped since it became evident that Eli Tomac had taken his position at Monster Energy Star Racing Yamaha, however, the KTM announcement comes later than the beginning of October as anticipated.

“I’m really excited for the opportunity to join Red Bull KTM and work alongside everyone associated with the factory team effort,” Plessinger said. “To be honest, I’m pretty excited to bring a new vibe to the team.

“I rode KTMs a lot as a kid, so I’m looking forward to getting back to my roots and having some fun but this time on the KTM 450 SX-F Factory Edition.”

Reunited with Star Racing this season, Plessinger finished fifth in 450SX with a podium at Daytona, before going on to record a string of top-three results in 450MX until he crashed out at Unadilla. He was 10th in the standings.

Plessinger will train with Aldon Baker at the Baker’s Factory in Florida, with Jade Dungey – most recently at Honda with Chase Sexton – rejoining Red Bull KTM as mechanic of the number seven.