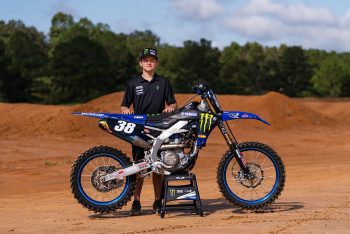 After eight years and multiple championships with the KTM Orange Brigade program, Haiden Deegan has officially joined the Monster Energy Star Racing Yamaha team for 2022 and beyond.

Deegan announced his departure from KTM as their contract came to an end last week, with many speculating that he’d soon be throwing his leg over a Star Racing Yamaha as he continues his transition from Supermini to a 250f.

Those speculations were confirmed this morning, with both Deegan and the team announcing the partnership that will carry Deegan through the end of his amateur career and into the pro ranks.

“We’re really happy to have a rider of Haiden’s caliber join our team,” team manager Jeremy Coker explained. “He has a great presence on and off the track and is a proven championship contender.

“We look forward to the upcoming season and look to bring home some more number-one plates!”

With the move, 15-year-old Deegan joins what has become a powerhouse team in the pro ranks, offering him the opportunity to learn from some of the best riders in the world.

“I’m excited to ride with champions and learn from them at Monster Energy Star Yamaha Racing,” Deegan explained. “I feel good on the bike and have a lot of work to do, and I am looking forward to it!”

The team has had success of late with their amateur program, most recently helping Levi Kitchen close out his amateur career and successfully move into the pro ranks with top 10 finishes.