Recovering Cianciarulo back on the bike outdoors 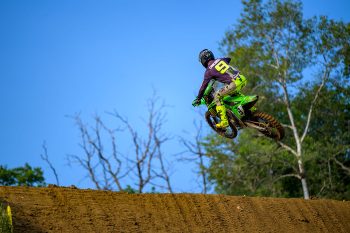 Following an injury-shortened campaign this season, Adam Cianciarulo is continuing to build after surgery on his right ulnar, now back on the bike riding outdoors in preparation for 2022.

Cianciarulo, 24, initially intended to see out the Lucas Oil Pro Motocross rounds this year, however, a crash in moto two at Spring Creek ultimately pushed forward the procedure.

Now over two months post-operation to regain strength and feeling in his right arm, the Monster Energy Kawasaki rider continues to progress with his preparation for the 2022 Monster Energy Supercross Championship.

“I’ve been riding the bike a couple of weeks now coming off of my ulnar surgery this summer,” Cianciarulo explained. “I had a few weeks off after that [the surgery], then got right back into my normal training and routine besides riding.”

“The last couple of weeks it’s been nice to get back on the bike and just ride some outdoors right now, we’re going to jump into supercross here soon. We’re just getting the feel for everything again, feeling good and having fun.

“I’m looking forward to getting on some supercross, getting some testing going and some training going there, it’s been a while since I’ve had a lot of time on supercross, so I’m excited for that, trying to stay in the moment and enjoy it.”

With his Supercross campaign this year also affected by ulnar nerve damage that he began experiencing in 2019, Cianciarulo was able to land a third at Houston 3’s third round, before his series was brought to a premature end after sustaining a broken collarbone at Orlando 2.

Chasing an elusive first 450SX title, Cianciarulo will be joined by former champion Jason Anderson at Monster Energy Kawasaki for 2022, with the season-opening round Anaheim 1 commencing on 8 January.