The 20-year-old looks ahead to Supercross debut. 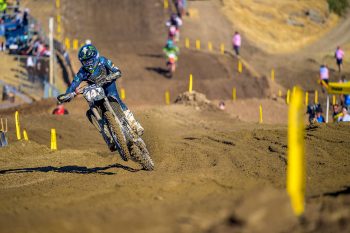 In his first foray into the professional ranks, it was all about the experience for Levi Kitchen who eventually notched three overall top 10 finishes in six attempts.

Kitchen ascended into the Lucas Oil Pro Motocross series at RedBud as the Monster Energy Star Racing Yamaha team decided to debut their rising star ahead of his final go at the AMA Amateur National Championships.

He progressed through the final five rounds, taking ninth overall last weekend in the series finale Hangtown, taking his best moto finish of the year with a sixth-place in moto one.

“It’s been a great experience to run these past few races with the whole team,” Kitchen explained. “I’m very thankful for everything they’ve taught me and feel like I’m truly on the best equipment out there. I’m looking forward to next season.”

The 20-year-old is slated to return to the Star Racing Yamaha team for 2022 and will make his Monster Energy Supercross debut following the offseason, something we spoke to him about in an interview earlier this year.

“Yeah, I’m stoked. I mean, if I said I wasn’t nervous I’d be lying,” he said. “I mean right now I’m not that nervous obviously but I know when the time comes I will be. But I just need to rely on my – you know I have pretty good bike skill for the most part, so I need to use that.

“All winter I’m probably just going to work on whoops, I feel like that’s the most important part of Supercross, that’s pretty much where races seem to be lost a lot of the time.

“So I want to get good at those, I’m not bad at them I rode them a bit before the spring nationals, but I ended up crashing a few times and broke my hand and stuff. So, I’ve just got to fix a few things in the whoops, and other than that I think I’ll be alright.”