Hangtown the target after Plessinger misses Pala round

Ohio native on the mend as final round approaches. 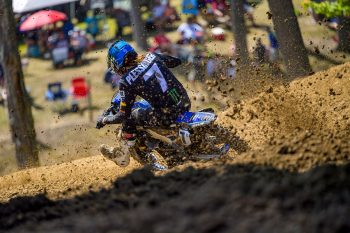 After being forced to sit out the penultimate round of the 2021 Pro Motocross at Fox Raceway, Aaron Plessinger is aiming to return for the final round of the season at Hangtown

After what has been a breakout season in the premier class, Plessinger’s final stanza of 2021 has been riddled with injury, courtesy of a crash at Unadilla while challenging for the lead.

Attempting to ride through the pain, the Ohio native has only managed to notch one moto finish since the mishap, eventually making the decision to sit out Fox Raceway to heal.

“I’ve tried to ride It out but The pain just isn’t really going away. The last two races have really weighed on me not being able to finish and I don’t want to do that again so hopefully, I will make It back for Hangtown but for now I rest. Thank you everyone for all the support!”

Plessinger’s 2021 season has seen him finish on the podium in both Monster Energy Supercross and Pro Motocross after two years of struggles in the factory Yamaha team.

While it hasn’t been confirmed he is rumored to be departing from the Monster Energy Star Racing squad and heading to Red Bull KTM for 2022. If that’s the case, the final round on Saturday at Hangtown will be his final outing for Star Racing Yamaha.