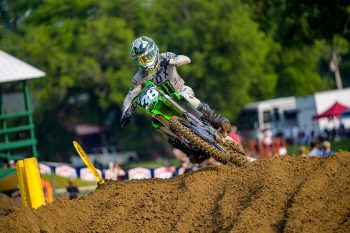 Austin Forkner scored his first top-five moto finish of the 2021 Lucas Oil Pro Motocross Championship with a fourth place in 250MX moto two at Spring Creek, a result he says is ‘huge’ in his outdoor campaign.

While Forkner’s first moto was mediocre, finishing in 17th, a strong opening lap in moto two allowed him to tag onto the riders in front and saw the 21-year-old settle into a rhythm while displaying some of his true potential.

“We ended the day how we had hoped to start it, but it’s huge for me to get a fourth and give me something to build on,” Monster Energy Pro Circuit Kawasaki’s Forkner explained.

“I need to be better on the start because I’ve made mistakes in the opening laps and it has cost me. Seeing that I had the pace today to get that fourth will push me even more next week to get up there and be where I know I can be.”

Forker has experienced a difficult return to motocross in 2021, with a low point coming at round five at Southwick where he recorded 14-25 results en route to 17th overall, after crashes left him with a lot of work to do in both motos.

However, he did display some promise in the way in which he was able to come back through the field, that potential showing with a better result at Spring Creek seeing him finish eighth overall for the weekend.

With things starting to look optimistic for the Kawasaki rider, who now sits 11th in the 250MX championship, he will be on the charge when round seven commences at Washougal this weekend on 25 July.