Overall winners Ferrandis and Hampshire recall fourth round in Michigan.

Round four of the 2021 Lucas Oil Pro Motocross season is in the books with Dylan Ferrandis (Monster Energy Star Racing Yamaha) taking the 450 overall and RJ Hampshire (Rockstar Energy Husqvarna) grabbing his first overall of the season in the 250 class. Both riders were made available to the media following the race for this Debrief interview. 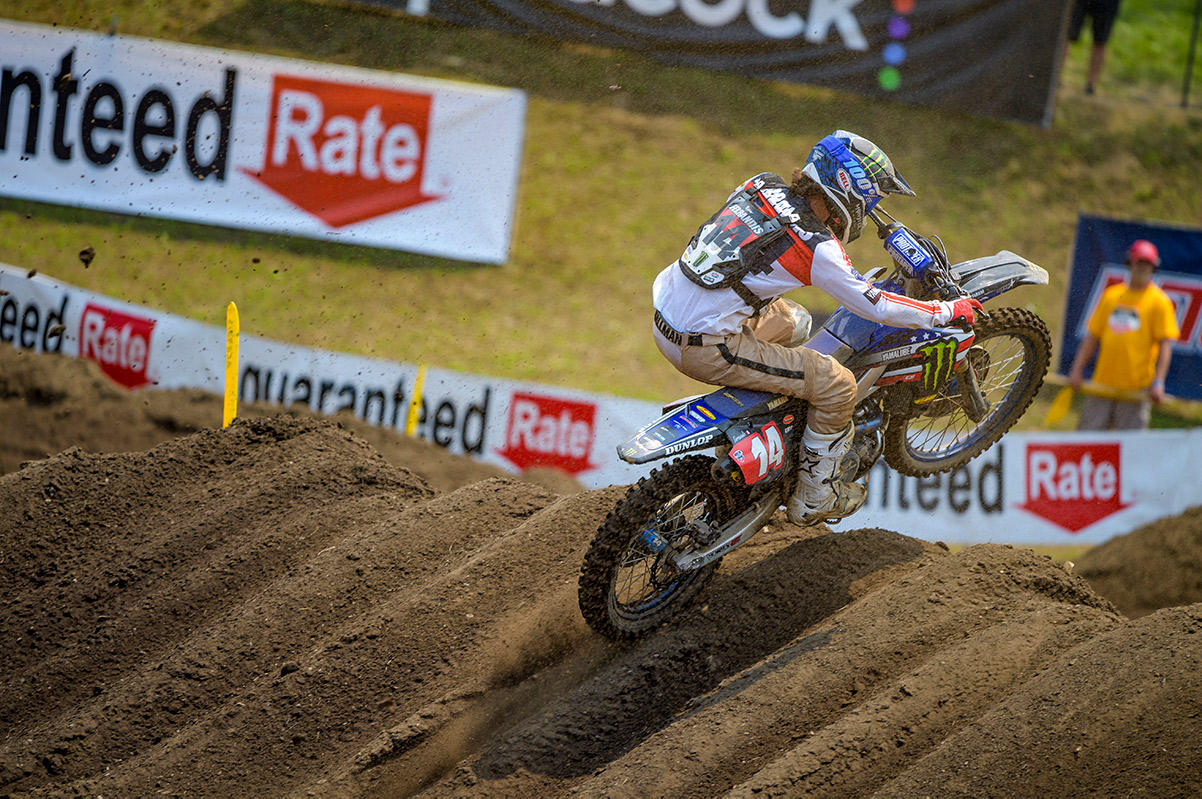 I know it seems more and more normal now that you’ve won three out of the four races so far, but are you still surprising yourself?

I was surprised, as a rookie and in my position, I haven’t won too many races in my life. So I never show up to the race thinking I’m the best I’m going to win for sure. Every time I show up to the gate I’m like ‘okay it’s going to be war, let’s try to get the best out of it and we’ll see.’ So yeah, again it was a crazy day today and I don’t know I felt good all day on and off the bike and I just gave everything in both motos and tried to make the difference in the lines. I think first moto jumping Lorocco’s Leap was key and I was seeing the guys in front of me not jumping it and I was surprised. So yeah, stuff like that and trying to be smart, trying to not give up until the end and it paid off. Right now I’m really happy.

How was it staying in Florida versus California over the last two weeks? What did you work on and did you gain anything by staying there this week?

We didn’t work on anything crazy, just getting used to the humidity, learned the new track, and yeah just keeping the same routine as in California. I kind of felt like, especially this morning, riding at RedBud without the humidity compared to Florida was just so much easier. So I felt like it was easier to push and the demand on my body was less hard and I could push more so that was funny. But in Florida we’re doing the same thing [as California], the facility over there is really good and the dirt is so good that we can really build ruts and berms lap after lap, compared to California where it’s more hardpack. So I don’t do anything different, same program, just on a different track in a different location.

What goes through your mind in moto two your title rival Ken Roczen goes down in front of you? What’s the mindset at that point?

First I was scared a little bit, it was a big crash. Then it took me two laps I think to – yeah, I was like ‘there’s an opportunity to gain some points so I need to make no mistakes. Yeah I don’t know, I wanted to charge but I couldn’t really. Also, the pace we had at the start of the moto was so strong that I just needed a couple laps to recover a little bit before charging to the end. It was difficult, you never want to see your rivals down and yeah, I was surprised because Ken doesn’t really crash like this often. But yeah it took me two laps to get back in the mindset of trying to win the race.

The first moto you got docked a point for jumping on the red cross flag, what are your thoughts on that?

I haven’t seen the video of it, so I don’t know. Honestly, it’s crazy… I’m not going to say what I truly think, but you guys probably already know. What is crazy is I never see the white cross flag because it was on the landing. My team told me there was one in the corner. If it’s true that there was one in the corner, I passed the corner and there was a yellow flag on the take-off, so I decided to not jump it because of the yellow flag and not because of the white cross flag – I thought it was safer for me, nothing to gain to try jumping the jump if there was a yellow flag. So I scrubbed half of the tabletop and the white flag was on the landing. I mean, it’s stupid and I guess if you ask Ken [Roczen], he said the same thing. He jumped because there was a yellow flag and when there’s a yellow flag you can jump. I don’t think the problem is the rider, because I think Ken and I are not known to take big risks like this for no reward, I think the problem is where they put the flagger. So if the AMA want to talk with me about this, there is no problem, I welcome them to come and ask me what we can do better for this situation. I just think, yeah, it’s not going to make a big difference for me, but maybe for Ken… one point you never know. It’s just a little sad to have to get docked points in the championship. We’re chasing these points so hard that as a rider you never like this situation and like I said, I never want to take risks to try a jump on that circumstance, but yeah, weird situation again. 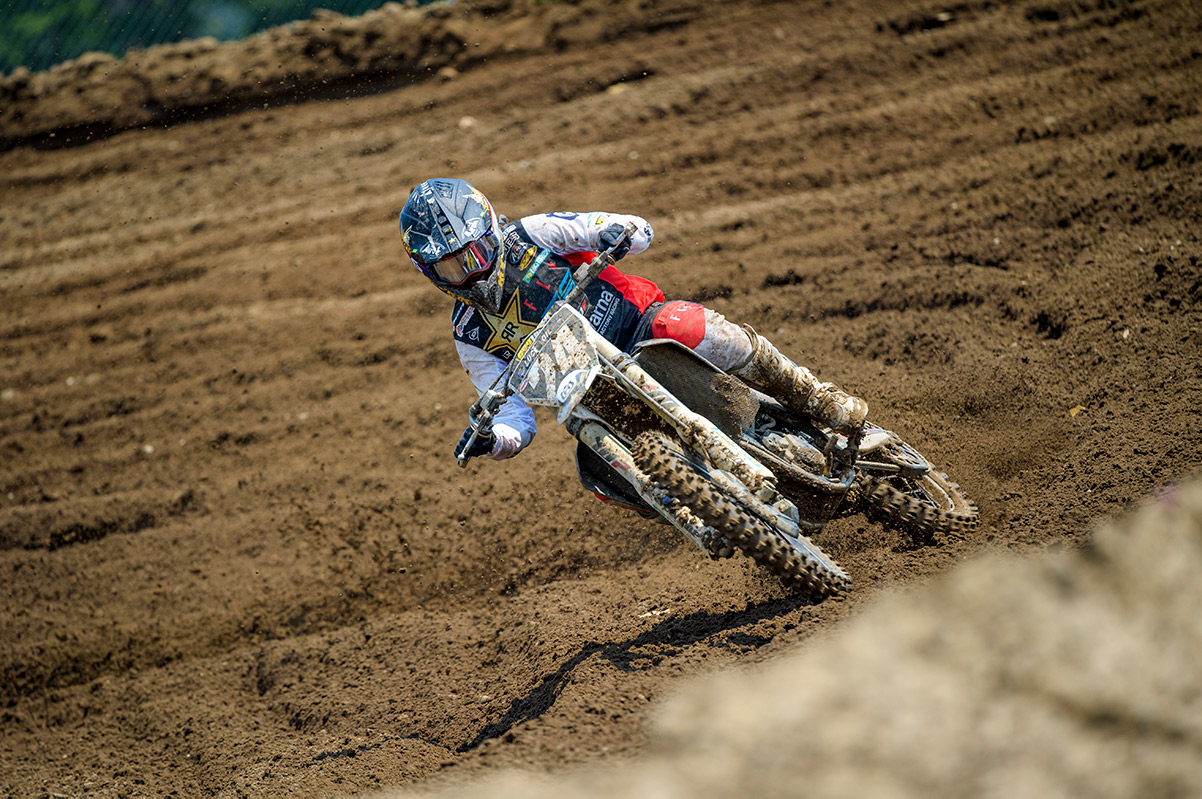 Was revenge on your mind today? You seemed so determined today, which you usually are, but was there a little bit extra motivation today because you’ve ridden so well this year and the results haven’t been there?

Yeah, that’s kind of been the story, I don’t think I’ve lacked the effort or even the speed. But yeah, ever since we left High Point, it sucked we had a weekend off so I had two weeks to sit there and think about that. Each day out I was like man I’ve gotta be the fastest guy right now. It’s a tough spot to be in whenever you have the speed and you’re doing the work and the results really aren’t there. So yeah, today was definitely special I had a chip on my shoulder to say the least, where man I was going to let it go. You know being sick during the week, I mean I do crash a lot no matter what, but it was a little bit extra today, I was so weak on the bike. Those three crashes I had, whenever the front wheel got out of the rut I couldn’t save it and just had to kind of fall with it. But yeah, awesome day and pretty stoked for the whole team.

Talking about being sick during the week, how much did that hamper your preparation, and did you feel like you could pull off a win when you woke up this morning?

Man, honestly I wasn’t sure at all, I had two good days Monday and Tuesday on the bike, and then as soon as I left the track Tuesday is where it really kind of hit me. Then Wednesday I pretty much did a full day but it wasn’t great. It kicked me hard Wednesday afternoon into Thursday and even on the flight here Friday I was like ‘man, this is gonna be a tough one.’ But yeah I woke up this morning and didn’t feel great either but to be honest Dr. G saved me big time. He made me feel no joke probably 70% better than what I did in the morning. So yeah, G gets a lot of credit for today.

You’ve had speed all season but the luck hasn’t been on your side, with the win now under your belt, how do you feel going forward into the rest of the season?

Man, it’s the same every weekend, we show up, you guys can tell I want to win so bad and sometimes it bites me. I just show up and if we’re in this thing at the end great, but I really just try to minimize the little mistakes and give it our all from here on out. I know these next couple races are tracks that I like and enjoy. Of course, everyone knows Red Bud is one of my favorites also, so I feel like we can get something going here and give it my best every weekend.

One of the major factors that kept you in contention for the win today was your ability to rebound from those crashes and get up to race pace again so quickly, is that a product of being so comfortable on the bike or was there another reason you were able to recover so quickly?

Yeah I mean my bike is awesome, I’ve said that for the last three weekends now. We had a little issue there with the second moto at Thunder Valley but we seemed to fix that and it’s just a comfort thing right now. I’m very comfortable on the bike and I’m able to do some things that I want to do and can trust and have confidence in it. Like I said, for me being weak today and to have that speed and be able to do what we did is a huge step and I think it goes to show how much improvement our bike has had and the setting we’re on. I feel like we did a lot of work when we could with this setting and yeah I’m pretty happy with it.

Zach Osborne was at the race this weekend with you, how’s it been working with him and how much is he helping you out?

Yeah you know Zach’s been a huge help, a bummer for him to go out like that. But right away when I figured out he was going to miss outdoors I reached out to him and you know just asked if he would be willing to help me out anyway, come to the practice track and then come on the weekends. Sure enough, this is the first weekend he showed up to and we got an overall. So I don’t know if he’s up for it yet, but hopefully, he can make it to a few more, and yeah it was nice to have someone there that’s kind of been through the same trenches as me and be able to succeed and have all the success he’s had.