The rookie hopeful for a return to action at High Point. 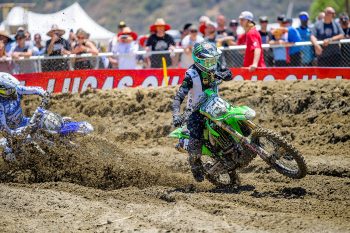 Monster Energy Pro Circuit Kawasaki rider Seth Hammaker has announced he won’t line up for round two of the 2021 Lucas Oil Pro Motocross season, the rookie opting to focus on his health before making a return to the series.

Hammaker took to Instagram to announce the news on Thursday, just two days ahead of the second round of the season at Thunder Valley in Colorado.

“So this isn’t the news I wanted to deliver this early into the season, but unfortunately I will not be lining up this weekend at Thunder Valley, Hammaker explained. “I haven’t been feeling 100% lately and don’t want to risk injuring myself out there or do further damage, so I’m going to take some time to focus on my health.

“I will keep you guys posted with more on the situation as I know more. I’m hoping to be back for High Point, but we’ll make that call in a few weeks. Can’t wait to get back out there and see you guys at the races!”

After a strong rookie Supercross campaign, Hammaker lined up at Fox Raceway for the opening round of the outdoor season, eventually going 11-23 for 16th overall. It’s not yet known what Hammaker is dealing with or when he’ll return to action.

The Monster Energy Pro Circuit Kawasaki team will now be down to just two riders for the weekend, with Cameron McAdoo out indefinitely with a leg injury he sustained last weekend at Fox Raceway.