Rockstar Husqvarna rider ruled out for six to eight weeks. 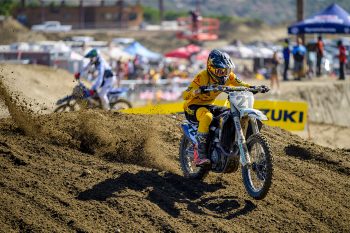 Rockstar Energy Husqvarna’s Jason Anderson has sustained a broken hand in a practice crash today and is expected to miss six to eight weeks to recover.

After posting 10-4 moto scores to take sixth place overall at the opening round of the 2021 Lucas Oil Pro Motocross championship last weekend at Fox Raceway, Anderson looked to be poised to contend for the 450 championship.

Unfortunately a crash at the practice track today will put his bid for the title to an end early, as he sustained a broken hand in the incident.

“It’s very unfortunate that Jason had a crash while practicing today, resulting in a broken right hand,” explained Stephen Westfall, Rockstar Energy Husqvarna team manager. “We wish him a speedy recovery and look forward to having him back to the races ASAP.”

While it’s not clear if he’ll need surgery to repair the injury, he’ll miss at least six to eight weeks, including this weekend’s second round at Thunder Valley in Colorado.