Direct updates from round one of the season in Pala, California.

Follow the opening round of the 2021 Lucas Oil Pro Motocross Championship with direct updates from Fox Raceway in Pala, California through Racefeed. 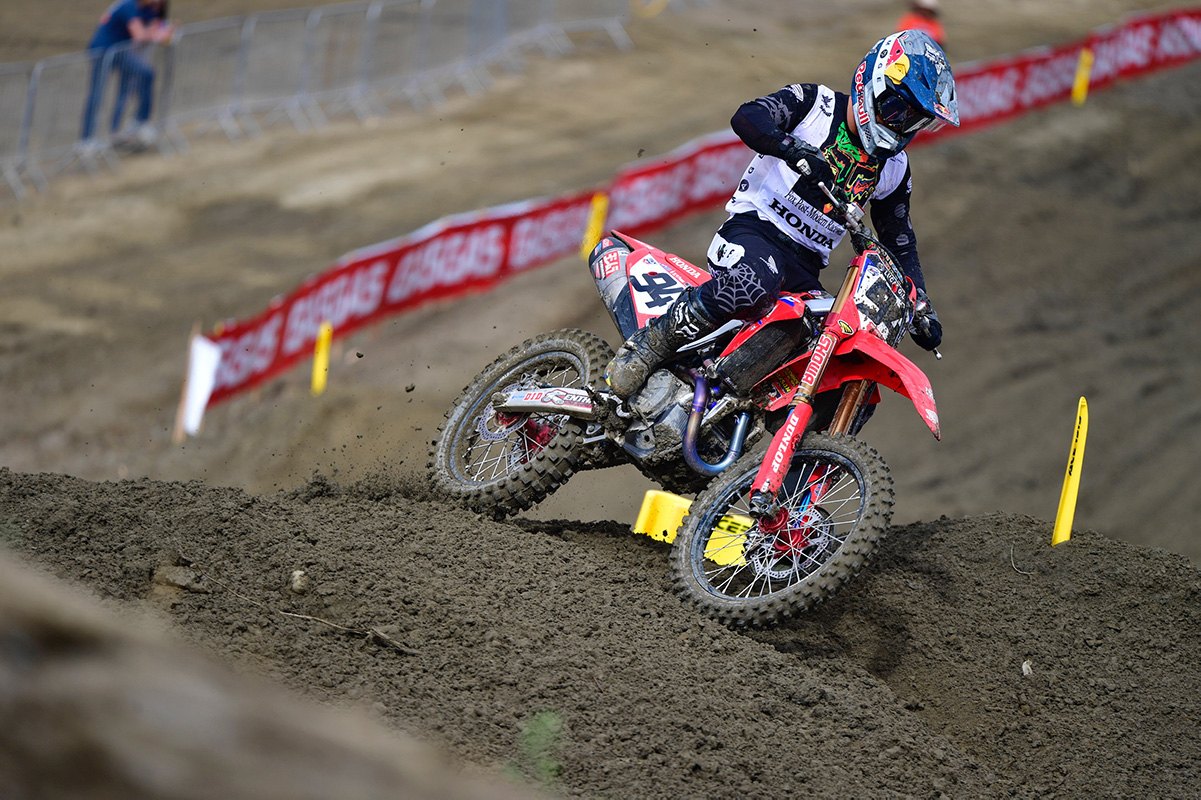 450MX qualifying:
After the opening 450 qualifying sessions were done and dusted, it was Adam Cianciarulo taking the top spot in his return from a collarbone injury. His fast lap of 2:18.793 set be bar ahead of Marvin Musquin (Red Bull KTM) and Ken Roczen (Team Honda HRC) who rounded out the top three. Fourth went to Dylan Ferrandis (Monster Energy Star Racing Yamaha) in his debut in the 450MX class. MXGP rider Alessandro Lupino (KTM) took fifth spot in his Pro Motocross debut. Jason Anderson put his Rockstar Energy Husqvarna inside the top 10, finishing the session in sixth. Seventh place went to Chase Sexton (Team Honda HRC) who looks to continue his momentum from last season’s win in the final round. Christian Craig (Monster Energy Star Racing Yamaha) put himself in eighth position in the opening qualifying as he sets out for a full season in the 450MX class, leading teammate Aaron Plessinger (Monster Energy Star Racing Yamaha) in ninth as he continues to build following a successful Supercross campaign. The final spot inside the top 10 went to reigning Supercross champion Cooper Webb (Red Bull KTM).

250MX moto 1:
The first holeshot of the season went to Max Vohland ahead of Stilez Robertson (Rockstar Energy Husqvarna), Martin, Hammaker, Cooper, and Garrett Marchbanks (ClubMX Yamaha). Vohland stretched out a slight lead early on as fast qualifier Jett Lawrence was buried down in 18th, working his way forward and into ninth place after five minutes. At that point, it was Vohland, Robertson, Martin, Hammaker, Marchbanks, Cooper, Hampshire, Ty Masterpool (GasGas), Jett Lawrence, and Michael Mosiman (TLD Red Bull GasGas) in the top 10. Vohland made some mistakes around the 20-minute mark, allowing Robertson to close in, but was able to stretch back out to a two-second lead in the following laps. At the 15 minute mark, things got going deeper in the field in the battle for fourth place, as Marchbanks, Hampshire, Cooper, Lawrence and Mosiman were separated by under one second chasing Hammaker. Jett worked his way into seventh around Cooper as MAsterpool dropped to 10th as Hampshire worked past Marchbanks for fifth. Hampshire began to pressure Hammaker and made the move at the 12-minute mark. Out front, Martin worked past Robertson and began to pace Martin for the lead. Marchbanks dropped down the order putting Larence and Mosiman into sixth and seventh. Back out front, with just under 10 minutes to go, Martin and Vohland swapped positions a few times, with Martin taking the lead. Lawrence worked past Hampshire into third as Robertson dropped to seventh. With five minutes to go, it was Martin, Vohland, Jett Lawrence, Hampshire and Mosiman in the top five, as Forkner and Hunter Lawrence worked their way into the top 10 in sixth and seventh. Jett Lawrence moved into second as Vohland’s bike continued to smoke and headed for the pits. Meanwhile, Jett closed the gap to four seconds on Martin out front with just two minutes to go. Forkner and Huner Lawrence caught the back of Cooper and the trio began to battle over fifth. Forkner bobbled and dropped to seventh, leaving Hunter Lawrence to chase Cooper as they caught Mosiman in fourth. In the end, it was Martin taking the win by nearly three seconds over Jett Lawrence ahead of Hampshire, Mosiman, Cooper in the top five. Sixth went to Hunter Lawrence, with Forkner, Marchbanks, Nichols, and Robertson rounding out the top 10.

450MX moto 1:
Webb grabbed the first 450 holeshot ahead of Sexton, Ferrandis, Cianciarulo and Roczen. Cianciarulo went from fourth to first within two corners and set out to gap the field. Roczen made his way through and into the top five, passing Sexton for fourth as Plessinger pressured from sixth. After one lap it was Cianciarulo, Webb, Ferrandis, Roczen, Plessinger, Sexton, Barcia, Osborne, Tomac, and Craig in the top 10. After five minutes Cianciarulo stretched a three-second lead over Webb. Sexton meanwhile, made a move to get back around Plessinger and into fifth, with second to sixth covered by around four seconds. Sexton’s forward momentum continued as he worked his way past Roczen with 20 minutes to go. Cianciarulo then lost traction coming into a downhill section, hitting the ground and dropping to fourth. Webb took the lead momentarily but was passed and gapped pretty quickly by Ferrandis. Plessinger worked his way past Roczen, dropping him to sixth with Barcia and Tomac hovering in seventh and eighth and Musquin closing just behind. With 15 minutes to go, Cianciarulo began to lap two-second faster than everyone else on track, signaling his race was far from over as he and Sexton closed in on Webb for second, with Ferrandis three seconds ahead. With 11 minutes to go, Sexton made an outside move to get around Webb and move into second place. At that point, it was Ferrandis out front followed by Sexton, Webb, Cianciarulo, Plessinger, Roczen, Barcia, Tomac, Musquin, and Craig holding down the top 10 spots. Defending champion Osborne was just behind Craig in 11th. Barcia made his way past Roczen for sixth at that point as Tomac closed on the duo. Barcia continued his momentum and sent it around the outside of Plessinger into the top five and closed in on Cianciarulo for fourth, making an aggressive move in the next lap. His strong moto continued, as he worked past Cianciarulo and Webb to put himself into third place. Plessinger then worked his way past Cianciarulo and into fifth, setting his sights on the rear tire of Webb for fourth with a lap to go. With half a lap to go, Sexton closed the gap to Ferrandis, slashing nearly three seconds in two laps. Sexton carried momentum into the final corner, missing out on the pass by just a tenth of a second, giving Ferrandis the win in his first-ever 450MX moto. Sexton took second, with Barcia rounding out the podium. Fourth went to Plessinger, with Webb in fifth. Roczen held on to sixth place with Cianciarulo recovering to seventh. Musquin took eighth ahead of Tomac, with Anderson taking the final spot inside the top 10. Defending champion Osborne finished the first moto in 13th.

250MX moto 2:
Cooper grabbed the holeshot in the second moto ahead of  Martin, Vohland, Jett Lawrence, and Mosiman. Hunter Lawrence, Robertson, Hampshire, Swoll, and Forkner rounded out the top 10. Martin began to pressure Cooper for the lead after five minutes, as the duo put a gap between themselves and Vohland. Jett Lawrence worked his way around Vohland and into third, setting his sights on the leaders just under two seconds ahead of him. Lawrence caught them with 15 minutes to go, the top three now over nine seconds ahead of Vohland, with Hunter Lawrence, Hampshire, Mosiman, Forkner, Swoll, and McAdoo. Jett Lawrence, sent it around Martin and closed the gap immediately to Cooper at the front as he looked to continue his momentum and take the lead. Lawrence, continuing to hang it out, got around Cooper and set sail stretching the gap to over one second in less than half a lap, with 12 minutes to go. Martin forced the issue to get around his teammate, doing so in the following lap, as Lawrence was now over two seconds out front. Deeper in the field, Vohland faded to 11th after contact with Hampshire, letting Mosiman into fourth with Forkner, Hunter Lawrence, and Swoll in tow. Martin put in a hot lap in the closing quarter of the race, but Lawrence responded and stretched the lead back out to over four seconds. Swoll dropped down the order outside of the top 10, as Vohland recovered and worked his way into eighth in the late stages. The battle for sixth then started heating up with Lawrence in sixth, Hampshire behind him as Vohland and Marchbanks battled just behind. As time ticked to zero and the checkered flag came out, it was Jett Lawrence taking the second moto win and the overall with Martin and Cooper rounding out the podium. Mosiman took fourth with Hunter Lawrence fifth. Marchbanks finished sixth as Vohland recovered to seventh. Forkner took eighth place, while Hampshire and Brown rounded out the final spots inside the top 10.

450MX moto 2:
Plessinger grabbed the final holeshot of the day ahead of Roczen, Cianciarulo, Webb, and Musquin. Roczen rocketed around the outside of Plessinger for the lead in the opening lap as Cianciarulo bobbled and dropped off the back of the duo. Osborne worked his way into fourth in the second lap with Barcia just behind him. Barcia made the pass on him but lost momentum after a mistake allowing Osborne back by. After a not so great start, Ferrandis worked his way around Webb into sixth as he charged toward the front. After five minutes, it was Roczen, Plessinger, Cianciarulo, Osborne, Barcia Ferrandis, Webb, Anderson, Craig and Musquin in the top 10. Sexton who crashed in the first corner leaving him dead last had recovered to 19th by the end of lap 2. With 18 minutes to go, Barcia made his way around Osborne for fourth place, with Ferrandis just behind and just a two-second gap to Cianciarulo in third ahead of them. Ferrandis made a move to get around Osborne, a crucial move for the overall results. Barcia caught Cianciarulo quickly, getting an incredible drive and sending his way past him, stamping it with a whip over the next jump. Plessinger caught Roczen with 15 minutes to go and began to pressure for the lead as the two of them had stretched out a 17 second lead over Barcia in third. Musquin worked his way through on Webb and Cianciarulo for seventh, setting his sights on Anderson in sixth with six minutes to go. Craig then worked his way past Webb, dropping him outside the top 10, as Sexton worked his way into the top 10 past the duo as well. Plessinger made a mistake giving Roczen a 2.7s lead with three minutes to go. In the end it was Roczen taking the win, with Plessinger just over 11 seconds back. Ferrandis took third, giving him the overall on the day with, Anderson and Osborne rounding out the top five. Barcia took sixth as Musquin, Tomac, Craig, and Sexton rounded out the top 10.