Cianciarulo to sit out remainder of Supercross season 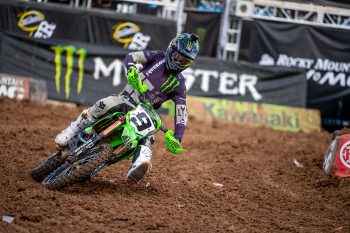 Monster Energy Kawasaki’s Adam Cianciarulo will sit out the final five rounds of the 450SX season, that decision made official this afternoon.

Cianciarulo’s second term in the premier class of Monster Energy Supercross came to an end after breaking his collarbone at Orlando 2 and undergoing surgery.

“Everything’s healing up fine, no complications and I ended up getting surgery,” he explained. “So, basically, as you saw, my front-flip attempt at Arlington last year if you guys remember, I ended up breaking my collarbone, had to get a plate.

“It was actually the first time I’d broken this collarbone, so I still had that plate in there when I crashed in Orlando and I ended up breaking it just to the inside of the plate. They had to take the old plate off, move it over on the new fracture site, drill new screw holes, all that good stuff.

“With that being said it breaks my heart to say it, I’m not going to be able to get back for the remaining Supercross rounds. It really sucks, I’m a positive guy, you guys know me as a positive guy, but super-tough to wrap my head around not being out there.”

However, Cianciarulo has confirmed that he will return to riding his factory KX450 this week in preparation for the Lucas Oil Pro Motocross opener at Fox Raceway on 30 May.

“I’m getting back on the bike tomorrow, so really looking forward to that and just got to start grinding away getting ready for the outdoor motocross championship,” he continued. “We had some good success there last year, so excited to build on that and to have some more fun.

“It has been a tough year for me so far, but that’s the way it goes sometimes. I haven’t let it get me down at all, it’s how it goes and I love this sport just as much in the bad times as I do in the good – it’s the nature of the game. Going to keep my head up, keep charging forward and do everything we can this summer to get some good results.”

It had been a difficult opening portion of the season for the 24-year-old, overcoming a procedure on his arm late in the off-season and then later struggling with further injury complications elsewhere as the rounds ticked over.

At the time of his exit, Cianciarulo was ranked eighth in the standings with a single podium to his credit after scoring third position at Houston 3.