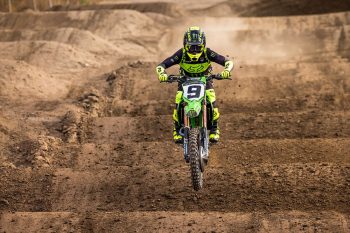 Monster Energy Kawasaki’s Adam Cianciarulo has opened up about a problematic elbow issue that required surgery in mid-December, repaired only weeks out from the Houston 1 season-opener.

The 24-year-old is unlikely to be at 100 percent in the early stages of 2021 Monster Energy Supercross, but remains optimistic that he can be competitive from the outset.

Cianciarulo initially was led to believe that a cyst on his wrist had been causing issues when gripping the handlebars, however, it became evident that there were further issues when a procedure in October didn’t actually solve his troubles.

It was then, upon further consultation, that his ulnar nerve was identified to be causing the difficulties experienced and he underwent an immediate operation in Colorado prior to the holiday season. It’s left little time to prepare properly for H1.

“Honestly, this off-season for me has been spent kind of getting this wrist thing that I had going on sorted out,” he explained. “I thought it was a cyst on my wrist and I ended up getting a little surgery in the beginning of the off-season.

“It kept getting worse and I found out that it was actually my ulnar nerve in my elbow, so I got a procedure done just before Christmas, so it’s been a lot better since then. I’m really, really excited to have that behind me.

“I don’t want to come across like I’m underprepared, because I feel fit, I feel good on the bike, it was just intermittently I wasn’t able to put a lot of weeks together. Last week was my first week where I was able to ride four times, which is kind of the usual for guys in the off-season.

“It was just managing my wrist – sometimes it’s good, sometimes it’s not so good. For example, the whoops would make it bad, so sometimes I would do 20-minute motos and go around the whoops… I wasn’t able to put in full weeks and months.”

In what will be his second term in 450SX, Cianciarulo enters 2021 as one of the favorites on paper, demonstrating his speed by qualifying fastest in the first seven rounds as a rookie and now aiming to convert that outright pace into victories and a potential title run this year.