The privateer taking an entrepreneurial approach to racing.

When it comes to privateers in the world of Supercross and Motocross, Kevin Moranz is setting a precedent and great example for younger riders both on and off the track.

Leading up to his pro career, the Topeka, Kansas native spent plenty of time going head to head with the household names of the amateur ranks, taking multiple top 10 finishes at Loretta Lynn’s through the years.

His amateur success went somewhat overlooked, never gaining the factory support of his peers. Not discouraged, Moranz got creative, taking an entrepreneurial approach to his program and eventually funding his entire racing program at age 17.

He built his program from the ground up on his own, all the way down to the website and creative opportunities for brands to get involved. It’s evolved every year, and for 2021 he’s implemented a tiered support system where fans and sponsors alike can help fund his effort.

“One thing I take a lot of pride in is getting creative,” Moranz said in a recent interview. “The problem that I had last year is I didn’t have a whole lot of support financially. I had sponsors and products and stuff for the race bikes, and I can handle that to an extent.

“There are so many expenses that go into it, that I was like ‘Okay to do this realistically, we need to get creative and provide something to a sponsor so that it creates an incentive for them to be a part of my program.’”

To do that, Moranz set up a program during the 2020 season that allowed sponsors to brand his helmet for a race weekend, receive marketing collateral, and eventually get to keep the signed helmet after the race, which was something the sport hadn’t seen previously.

For 2021, he added a way for fans to get involved, offering multiple levels of membership via Patreon, with exclusive access to content, products, and giveaways throughout the season.

On the track, Moranz has come into the 2021 Monster Energy Supercross championship with quite a bit more speed than in previous years, taking top 10’s in three out of six 250SX East main events he’s qualified for so far this season.

As the 250SX East championship went on break, Moranz elected to line up against the best in the world in the 450SX class. So far making two main events and getting plenty of TV time by nearly pulling holeshots on the field. 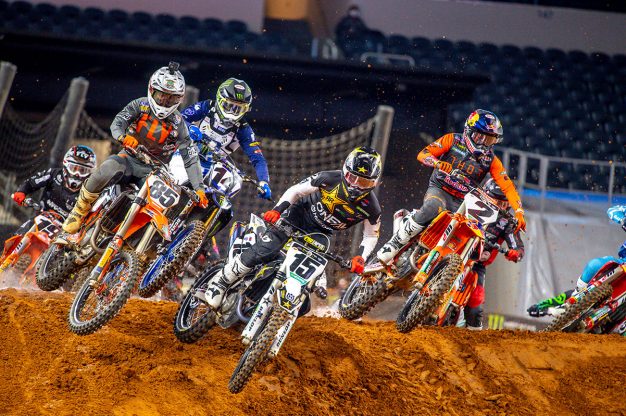 Of all of this, the part that excites him is his success given the lack of on-track prep he had coming into the season, much of which he attributes to the time and effort he’s forced to put into running his own program.

“[So] if things were taken care of for me so that I don’t have to do the ‘as soon as I wake up to as soon as I go to bed’ to make the program work, I really think that my potential is way up there.”

Currently sitting just one point outside of the top 10 in 250SX East points standings, Moranz will continue to cut his teeth in the 450SX class while he waits to return to 250SX action in Salt Lake City.