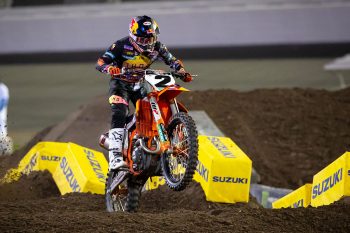 An unfazed Cooper Webb was able to respond to the comments of Ken Roczen following an early exchange at Daytona, tension escalating following an aggressive second-turn move.

Roczen was left furious following round nine of Monster Energy Supercross when he felt Webb purposely ran him into the tuff blocks, however, Webb later played down the move.

“It was second turn, I had a great start – me, Ken and Eli were all right there. Eli was on my inside and Kenny was on my outside. I kind of went through the middle there and wanted to make sure I could get ahead of Ken, just made the move right there in that second turn and then followed in behind Eli.

“When we got back he was running his mouth, but I didn’t really hear what he said from the podium or anything. He wasn’t too pumped, but I mean, I’m not too sure why – I saw an opening and went for it. You know, he’s really focusing on himself this year and, clearly, he showed how much he’s focusing on himself…”

It was a pass on Aaron Plessinger in the final moments that enabled Webb to further narrow the gap from six points down to two at the halfway point of the 2021 season. He gradually improved as the main event wore on, fending off a late attack from Roczen in the process.

“As the race got going I started getting better, figured some lines and was able to make that last lap effort there at the end, which was critical,” added Webb. “Overall, it was a good night of racing and points-wise it was almost about as good as you can get.”