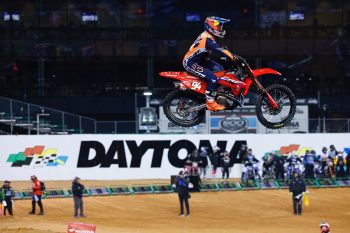 Team Honda HRC’s Roczen was forced to work his way from toward the rear of the top 10 to salvage fourth on a night where the ever-determined Webb made a late move for the runner-up.

Those results have enabled Red Bull KTM’s Webb to narrow the 450SX points from six to two points at the halfway mark of the 2021 championship, however, Roczen expressed his discontent at Webb after missing the podium for a second-consecutive round.

“You know, obviously I got a really good start and Webb just pushed me really wide into the tuff blocks, which caused me to lose a bunch of spots,” Roczen said post-race. “I think he’s scared of me, you know, that’s why he plays these kind of games, but little does he know, I like to play as well.

“From here on out I’m just going to put in that little bit of extra focus, even at home, to be that much better on the weekend – he’s just fueling the fire and I’m ready for it. I mean, he got this one round and the points have closed up a little bit, but we’ve got plenty of racing to go. I like to play, so let’s go.”

Roczen had been sizing Webb up for a move around halfway before making a costly mistake and allowing Malcolm Stewart (Monster Energy Star Racing Yamaha) past, but the German quickly made amends and set chase after Webb once again. It wasn’t to be and he had to settle for fourth in the main event won by Eli Tomac (Monster Energy Kawasaki).

“Throughout the race, I had to make a bunch of passes in the beginning and I messed up in that rhythm big-time, had to roll a bunch, so Malcolm went back by,” added Roczen. “Had to get back by him and latched onto Webb, but it just wasn’t enough. Other than that, I had fun racing out here – it’s all good… Can’t wait for Dallas.”