Battered, bruised but looking to rebound upon return in Daytona. 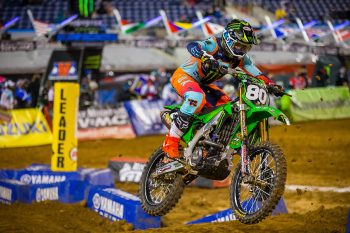 Monster Energy Pro Circuit Kawasaki’s Jordon Smith escaped his night-ending crash unscathed in the opening 250SX West round, citing a lingering injury as the cause.

A favorite for the 2021 Monster Energy Supercross 250SX West title, Smith had a rough go at things in 2020. The last time we saw him in action was at Daytona Supercross in March, where his season ended following a knee injury.

As he began to prepare for the 2021 season, Smith’s 2020 run of bad luck continued when he tore a ligament in his thumb in December, requiring surgery. He received surgery using a new technology that allows for quicker healing and an almost immediate return to action.

Unfortunately, the injury is lingering and was the cause of a crash that knocked him out of the season-opening main event on Saturday in Orlando.

“I just wanted to come into the first round and be smart and build through the season,” Smith said. “The whole day was going great until the strength in my thumb made my hand slip off going through the whoops.”

While he was slow to get up and appeared to be injured, he looks to return to the track for round two at Daytona: “I have a lot of positives to build on and I’m thankful I was able to walk away okay. I’m bruised up, but I’m going to go back and heal up and be ready for Daytona.”

With a break in the schedule and no racing this weekend, Smith will have a chance to recoup before the series returns to Daytona International Speedway on 6 March.