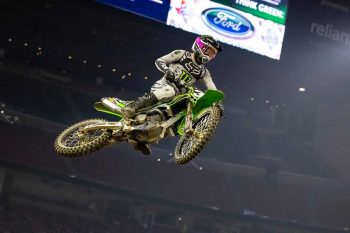 Monster Energy Pro Circuit Kawasaki’s Jo Shimoda continued his string of consistent results in Houston, tying his season-best of fourth to close out the events held inside NRG Stadium. With his consistency, Shimoda sits fourth in the championship points standings. Teammate Austin Forkner sat out of the racing on Saturday due to injuries he suffered during a crash in qualifying. He will be evaluated this week to find out a possible return date.

It was another day of Shimoda riding quietly into the top five. His consistency is paying off for the young rider, who has now finished either fourth or fifth in the first three races. Shimoda had been having trouble finding his groove early in the race, but in Saturday’s main event he made quick work of his competition and moved from his sixth-place start up to fifth on Lap 2. He moved up to fourth, and after moving back to fifth at one point, found his way back into the top four to close out a great week of racing in Houston.

“My main event start was better than the first two rounds, but I should have made a few better decisions on the first two corners because it cost me a few spots,” said Shimoda. “I did feel much better this race from the start, but I couldn’t get comfortable in the whoops and it was causing a little arm pump. It takes a lot of energy out of you so that will be something I need to fix for the next race.”