New-look roster to be led by Brayton as Australian returns home for 2021. 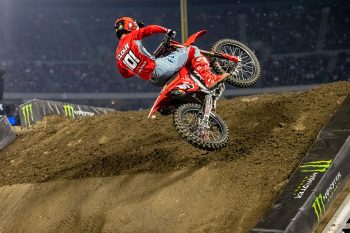 Penrite Honda and Luke Clout have split in the lead-up to 2021 Monster Energy Supercross, the Australian revealing his American opportunity is over as he appears certain for a return to Yamaha at home.

The 26-year-old was due to remain in Australia full-time this season in addition to entering the first six rounds of 250SX West as the Yarrive Konsky-owned Penrite Honda team launched its US program. It was later determined that Clout would finish the series, earning ninth in the standings

A two-year agreement should have seen Clout continue in America for 2021, however, the pair have since opted to part ways and all signs indicate that he will instead return to CDR Yamaha Monster Energy in Australia alongside Hayden Mellross.

“I want to thank Yarrive and Honda for helping me live my dream and everyone who was associated with the entire team to getting us to race the whole series in another country,” Clout confirmed. “I really enjoyed myself racing the best of the best, it wasn’t easy! Unfortunately we won’t be back together next year – I want to wish everyone involved the best in the future.”

It’s unclear at this point why Clout and the Honda won’t be together next year as intended, unable to comment when contacted by MotoOnline recently. It’s expected that both Penrite Honda – which will bring in a new title sponsor from 2021 with Penrite exiting – and CDR Yamaha Monster Energy will confirm their rider line-ups this coming week.

The only confirmed rider for the expanding team of Konsky in America is the experienced Justin Brayton, leading the Honda-supported squad’s transition into 450SX with the latest CRF450R. Mitchell Oldenburg is in line to remain, while Mitchell Harrison has also been heavily linked to a seat after being seen testing in recent weeks.

Despite displaying his capabilities overseas and gaining increasing fan support from Australian onlookers, Clout has so far been unable to crack ongoing success in the US, this year being his second attempt and again unfortunately ending in a premature return home.

While Clout is tipped to be rejoining the Craig Dack-led factory Yamaha team alongside Hayden Mellross, it had already been widely understood that Kirk Gibbs would be departing and it now makes sense that he will switch to Honda outdoors in Australia for the coming year.

Gibbs, the reigning New Zealand champion, rides on a motocross-only contract and could easily make way for Brayton to return and challenge for a fifth-straight Australian SX1 crown later in the year. Both Brett Metcalfe and Kyle Webster are believed to be retaining their seats at Honda locally.