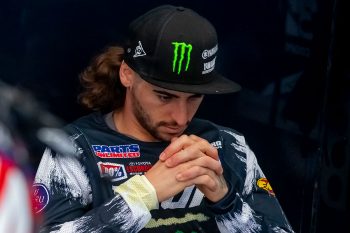 Monster Energy Star Racing Yamaha 450SX rookie Dylan Ferrandis has broken his hand in a practice crash this week, pausing his preparations for 2021.

The reigning two-time 250SX West champion has stepped up to the factory YZ450F for next season, lucky to escape further injury in the scare.

“I only have broke my hand and bad bruises on my body, but it could have been a disaster crash. I will try to heal and come back as fast as possible to be ready for the Supercross [championship].”

Ferrandis carries major expectations into his first season of premier class competition, partnering Aaron Plessinger and Malcolm Stewart at Yamaha and set to debut on 16 January at Houston’s season-opening round.