JGRMX team set to cease operations prior to 2021 season

Factory Suzuki team to close after being unable to secure funding. 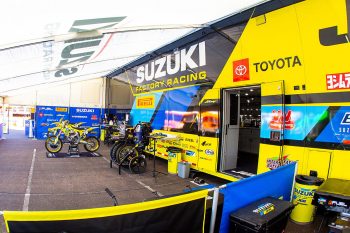 JGRMX appears certain to cease its operations prior to the 2021 season, ending a 13-year stint in operating its professional motocross and supercross team, still unable to fund the program into next year.

First hinted by PulpMX on Twitter, rumors have been widespread that the North Carolina-based team would be closing its doors and a post on the JGRMX social media accounts today has all but confirmed the news.

A sombre video has been posted to thank the fans of JGRMX following over a decade in the sport, beginning as a Yamaha-equipped program in 2008 and then transferring to run Suzuki machinery in 2017 and then took over the factory team from 2018. No official press release has been distributed at this point.

Joe Gibbs Racing (JGR) first entered the sport under the leadership of Coy Gibbs, expanding upon its iconic NASCAR organization and immediately hiring Jeremy Albrecht in a team management position. Albrecht has led the effort since.

This year saw JGRMX Yoshimura Suzuki field Joey Savatgy and Fredrik Noren aboard the RM-Z450, as well as Alex Martin and Jimmy Decotis – who only completed a partial season – riding the RM-Z250. An injury-affected year saw Broc Tickle join the team in the later stages of 450SX, while Isaac Teasdale made a number of guest appearances outdoors.

In recent years, each off-season it has been in question whether JGRMX would have the funding to continue in the following season, however despite promise that a new title sponsor would be secured for 2021, it now looks certain that the team has made the decision to close altogether.

It’s another severe blow for the sport just two months out from the opening round of 2021 Monster Energy Supercross on 16 January in Houston, with JGRMX to follow the Factory Connection-owned Geico Honda team in exiting competition. There has been no confirmation what Savatgy, Noren or Martin will be doing next year.