Two decades at the top levels of the sport come to an unexpected end. 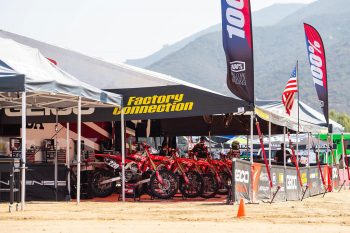 Geico Honda’s closure has been formally announced in a statement released by the Factory Connection-operated team, ending its run of over two decades competing at the highest levels of the sport.

Insurance giant Geico, which had been title sponsor of the factory Honda 250 program for 13 years, advised Factory Connection on August that it would be departing after pulling out of all motorsport team sponsorships.

“We definitely didn’t see this announcement coming and the term ‘all good things must come to an end, just doesn’t seem fitting,” a statement released by the team said. “After 22 years and 12 championships, we were forced to make the decision of closing down our race team.

“We were thrown a curveball in August by losing our title sponsor. We have worked tirelessly to try and find a replacement but given this unpredictable year, we ran out of time to get something put together.

“We would like to thank our staff and riders for being as understanding as they can be in this situation. Being forced to close our team doesn’t mean we lose the family we created and no matter where our next chapters take us, our bond will not be broke.

“Thank you to every team member, rider and their families who have come through our operation – we truly could not have done it without you. This sport requires a lot of sacrifices from more than just the rider and we have been lucky to have some amazing support systems behind our guys.

“A huge thank you to our fans! We feel extremely blessed to have so many people stand behind our team and riders through the good and the bad. The dedication and love we have been shown through the years is second to none. Although we all are going our separate ways, please stop and say hi when you see us!

“Last, but not least, so many great sponsors have supported us through the years. American Honda and Factory Connection have been there from the beginning and we couldn’t have done this without them! Our hope is that you continue to support those who supported us through the years to come. Thanks for the memories everyone. To say we will miss you all is an understatement.”

It’s a shock moment to see one of the most high-profile teams in all of motocross close its doors following such a successful 20-plus years, leaving the future of existing team riders Jeremy Martin, Jett Lawrence, Hunter Lawrence, Jo Shimoda and Carson Mumford up in the air.

It’s understood that Christian Craig – who rode with Team Honda HRC outdoors – had already completed a deal with Monster Energy Star Racing Yamaha, while the Lawrence brothers will be almost certain to be remaining at Honda in a newfound factory program. Martin has confirmed he is switching brands, however, Shimoda and Mumford are still thought to be in discussions.

On the same day the team announced it will not return to racing in 2021, it also enjoyed an incredible performance in the final outing as Jett Lawrence scored his first-ever Lucas Oil Pro Motocross overall with 1-2 moto scores and was part of a poetic podium sweep in the team’s final race, with Martin, Lawrence and Shimoda going 1-2-3 to cap-off the year.