Aspects we've noted regarding the launch of next year's championship.

The 2021 Monster Energy Supercross schedule was announced earlier this week, featuring a never before seen structure that will include an assortment of firsts for the world championship series. To dive deeper into next year’s plans, we’ve listed our Top 10 key aspects that you should be looking forward to. 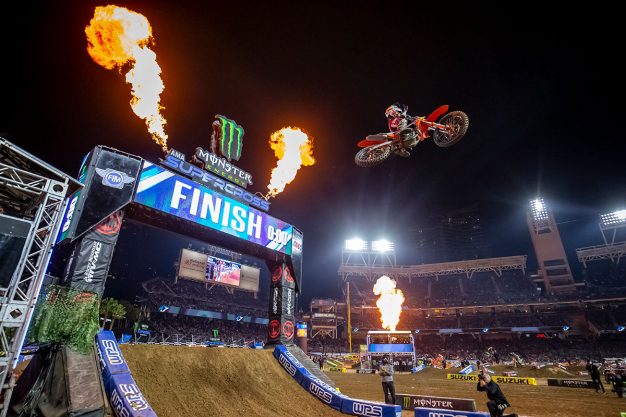 1. Late start:
Traditionally, Supercross opens with the famed Anaheim 1 opener on the first weekend of January, but that won’t be the case this time out following 25 years. Instead, NRG Stadium in Houston, Texas, gets the honor when the gates drop on Saturday, 16 January. It will be a strange start to the year, but the schedule’s packed once it starts, with five rounds to take place over an 18-day period!

2. SuperTuesday:
Following the success of mid-week races in the seven-round Salt Lake City run earlier this year, ‘SuperTuesday’ has been implemented for 2021 at Houston, Indianapolis, Glendale and Arlington. We’re supporters of the concept, television ratings were strong in Utah and there could be even more in the works during the latter stages of the series.

3. Race blocks:
As a result of the Tuesday races and largely due to limited stadium availability, next year’s SX season will be split into what are essentially blocks of races. The opening five rounds will be held in close succession before two weeks off and then rounds six through nine will take place, followed by one more weekend off. It then continues with a triple-header at Arlington and no other dates have been confirmed following easter.

4. Options open:
With so many uncertainties right now, Feld Motor Sports have opted to leave options open beyond the easter weekend in April. Locations and dates are yet to be finalized aside from the confirmation that Rice-Eccles Stadium in Salt Lake City will again host the finals and no later than 8 May. We could see California join the schedule, otherwise a selection of differing venues depending on spectator allowance and regulations, or even potentially a longer stint in Utah once again.

5. Limited stadiums:
Because of coronavirus, only selected states and stadiums are able to have Supercross attend while meeting the requirements that Feld needs to bring this unprecedented season together. So, as it stands, only six venues are listed, being Houston, Indianapolis, Glendale, Daytona (not a Feld event), Arlington and Salt Lake City. 6. Crowd capacities:
Despite finishing this year out behind closed doors and without spectators whatsoever, the sport has to have fans back in the stadiums to remain viable in 2021. Expect around 20 to 25 percent capacities at the stadiums, which is why organizers can get away with hosting three races within the one stadium over eight days, and that also saves money. Otherwise, for single events to be viable there would need to be at least 50 percent of a sell-out capacity.

7. Financial strains:
There’s no denying that this is an incredibly challenging time for any sport to be held in stadiums with reduced opportunities to sell tickets. Supercross boss Dave Prater has stated on the record that Feld is ‘definitely going to be taking a hit financially’, but at the same time, they’re leaving no stone unturned in order to make the series a success.

8. 250SX East first:
Since Anaheim is usually the opening round, of course we are used to seeing 250SX West on track first, before the eastern region starts a month or so later. With Houston now starting the season, 250 SX East will be first on show and it will be fascinating to see how that changes the dynamic in regards to who rides where. Will the west still be regarded as the stronger coast?

9. COVID-19 protocols:
“We’ve always held ourselves to a high standard and we’ve got to raise that standard,” Prater said of any precautions due to the pandemic. Spectators will be seated in a ‘pod’ environment, similar to what’s been happening with NFL, so you will be seated with your family or close friends while still social distancing from other groups. Fast masks will be required, sanitation processes stepped up and Feld has an epidemiologist on staff to ensure safety is paramount.

10. Futures on pause:
One of the major, but understandable disappointments is that the Supercross Futures won’t be participating in 2021. Protocols and restrictions simply make it too difficult to incorporate the amateur ranks next year, but the plan is definitely to bring them back in 2022. In the meantime, Loretta Lynn’s and additional events will be part of the SX advancement process.