Complete 17-round calendar confirmed across at least six different locations. 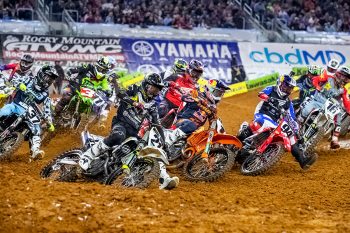 The 2021 Monster Energy Supercross championship schedule has been released and will commence with a triple-header from mid-January in Houston, set to span the full 17-round season.

No longer will the series take-off with its traditional Anaheim 1 opener on the first weekend of the year, instead confirming the gates will first drop at NRG Stadium in Texas.

With a reduced spectator attendance welcomed, due to go on sale in December, all but four rounds have been uncovered as we await confirmation on the locations of rounds 13-15. Salt Lake City will again host the 2021 Supercross finals at Rice-Eccles Stadium, that date also remaining to be announced.

California has hosted the opening round of Supercross over a 25-year period, however, Texas will have the honor in 2021 with round one scheduled for Saturday, 16 January. That will lead three-straight events followed by Tuesday, 19 January, and the following Saturday, 23 January in an unprecedented strategy.

From there the series will travel to Indianapolis where round four will take place on Saturday, 30 January, directly followed by Tuesday, 2 February, in a double-header at Lucas Oil Stadium. Almost three weeks later, Glendale will stage a triple-header from Saturday, 20 February, followed by Tuesday and Saturday races in State Farm Stadium.

Round nine will see the historic Daytona International Speedway remain on the schedule, before another lengthy pause until Arlington holds the next three events at AT&T Stadium between Saturday, 20 March, Tuesday, 23 March and Saturday, 27 March. The following round rounds are to be announced.

The regional 250SX East series will take place across the opening five rounds, as well as round nine at Daytona, while 250SX West will debut from round six, also having six rounds confirmed to date.

After hosting the final seven rounds of this year’s Monster Energy Supercross season, Salt Lake City has been confirmed as round 17 once again. Additionally, the remaining 250SX Class races, Triple Crown and East/West 250SX Showdown events will also be announced later.

The mid-week races, which proved widely popular in SLC this year and also boosted television ratings, have been labeled ‘SuperTuesday’, with one confirmed for each of the host cities in Houston, Indianapolis, Glendale and Arlington – a first in the sport’s 48-year-history.