Desire isn't there for former Supercross champion to compete again. 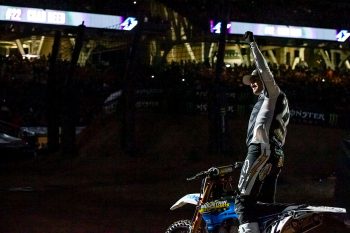 Retired Australian icon Chad Reed has conceded that it’s becoming increasingly unlikely that he will make any one-off guest appearances in Monster Energy Supercross during 2021, stating that he doesn’t have any desire to race at this point.

Reed, 38, formally completed his final full-time season with a top 10 result at Salt Lake City 7 in June, but didn’t rule out the chances of him returning for one-off races next year while in Utah.

However, that stance continues to fade as the Reed family embarks on a series of BMX events with their three young children learning their craft with immediately encouraging results. That’s where Reed’s focus lies less than three months out from Houston’s opening round on 16 January and during recent months he’s not even considered a return.

The 2021 Monster Energy Supercross series will be held with just 20 to 25 percent spectator capacities unless COVID-19 restrictions ease dramatically, with limited locations and strict protocols still to be in effect in order for the championship to be held across 17 rounds. That isn’t an attractive

“I think I’m done,” Reed told MotoOnline.com. “Very little in me wants to race next year. I haven’t honestly given it any thought, just been wide-open being a BMX dad. I just don’t have any desire to race with all the restrictions the world has going on right now – it sucks the fun out of it for me.”

It’s been a remarkable career for Reed at the professional level for over two decades, the two-time 450SX champion defying the odds to remain competitive into his late 30s and continually reinvent himself among multiple generations of riders at the very top level of the sport.