Select appearances could be on the cards for next year. 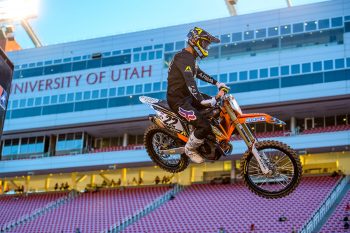 Monster Energy Supercross legend Chad Reed hasn’t closed the door on lining up for select races in 2021 as he approaches the final outing of his full-time career this Sunday in Salt Lake City.

Reed has gained strength since switching to KTM machinery with his Mountain Motorsports CR22 Racing team for the final seven rounds in Utah, but it’s the opportunity to say a proper goodbye to fans in the stadium that has him considering racing on.

It will be another emotional step this weekend as the Australian’s career continues to wind down at Rice-Eccles Stadium, still able to qualify for 450SX main events and finishing a season-best of 11th in both SLC4 and SLC5. With a career on four-wheels looming, race fitness could be a determining factor if he’s to show up again come January and continue to transfer into the finals.

“As I sit here today in shape and I’m racing, I absolutely want to come back and race,” the 38-year-old admitted. “As I start to phase out and start looking at car data, racing four wheels and all these kinds of things, do I have the motivation to want to get back into shape and the work that it takes to qualify and race these races? That’s the unknown.

“Sitting here today, emotionally and physically, I don’t want this to be the end right now. I really want to race some races next year – I think that would be really fun to experience fans again. What I get from racing in front of fans, when they turn the lights off, do opening ceremonies, the fireworks, the anthem, all those things I want to experience that one last time.”

Reed – a father of three – has maintained that he is retiring from full-time competition since announcing it last November and not hanging up the helmet altogether, which could see him commit to races internationally next year in addition to potential US appearances. It’s not decided how many Supercross starts he will intend to do if the stars align come January.

“You know, for me, I was never able to… I never trusted myself, so it was always this is the end of a full-time racing career,” Reed explained. “I no longer have that burning desire to want to work year-round to do a 17-round series anymore, but yeah, jumping in, doing some races whether that’s here in the US, Europe, Australia or whatever [is a possibility].

“And obviously with the ending that we’re currently experiencing, it’s far from what I pictured as my last seven races. That doesn’t need to be a negative, it’s not that I’m talking that these races suck or anything like that, it’s just a very different feeling.

“You know, I decided to race this year fully based on the fact that I wanted to kind of say my goodbyes and enjoy multiple stadiums around the country and I didn’t get that opportunity – we’re really six stadiums short of what I planned out to do.”