A variety of states and stadiums could be considered after April. 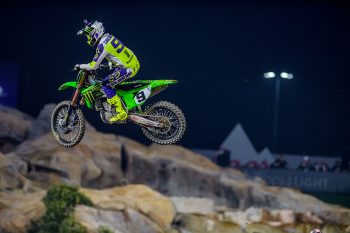 Rounds 13 through 16 on the 2021 Monster Energy Supercross schedule remain open as organizers continue to evaluate options, including potential additional stadium availabilities into the new year.

Today’s calendar announcement has confirmed that Houston, Indianapolis, Glendale and Arlington will all hold multiple events, with Daytona a staple and the championship finals at Salt Lake City also confirmed.

However, dates for any rounds beyond the end of March and easter remain to be announced, with California, Georgia or even consecutive rounds in Utah – as well as more familiar locations – all being considered depending on state regulations and stadium requirements as a result of the COVID-19 pandemic.

“We knew we needed to get a schedule out there, we needed to give everyone in the industry time to plan, along with ourselves, so we’ve been going back and forth,” said Dave Prater, Feld Motor Sports director of operations – Supercross. “We’ve probably come within a day or maybe an hour from announcing it before and things were just dynamic and changing, not only with us, but with the venues.

“So at some point, maybe a month ago, we drew a line in the sand at easter, and said, ‘look, let’s work on these first 12 events prior to easter, knowing that things are still going to change, but that gives us those first 12 events that we have locked in. And then, let’s be hopeful that by the time April gets here, things have loosened up a bit, we’ve got a little more leeway as far as capacity within the stadium and areas in which we can race to work with, rather than lock ourselves into 17 rounds and then things open up and we’re at a loss’.”

With the traditional Anaheim 1 opener on pause at Houston to commence the 2021 Supercross championship instead, ongoing monitoring will be placed upon California to see if any of those stadiums can be factored into the latter stages of the season.

“I wish I could say – I don’t have my crystal ball,” Prater added. “I know it’s interesting, it seems like in the last couple of weeks that California seems a little more optimistic than they were a few weeks ago, a month ago. Anaheim, obviously we love Anaheim and Angel Stadium’s been a great partner forever. They were disappointed, but they understand completely. And the other thing with it is, Anaheim, San Diego and Oakland are obviously all baseball stadiums.

“Well baseball, major league baseball had made… They were basically taking the stance that up until the post season, they weren’t going to entertain having fans at all, so up until recently, Angel Stadium, Petco and Oakland couldn’t really talk to us about what was going to happen because they didn’t know. Again, I’m optimistic, but who knows, California could slide into that April date if it opens up, but that remains to be seen.”

Salt Lake City could be a genuine option to host additional rounds prior to the final round. It has been confirmed that the series will unlikely go beyond 8 May in order for teams to prepare for the Lucas Oil Pro Motocross opener that would take place later in the month.

“We haven’t really discussed it, but that would definitely be – assuming that Salt Lake city was open throughout April and with the PAC-12 pushing their football season later in the year, that could disrupt us a bit – but assuming there they were open and available, yeah, that could be a potential play if it comes to that,” he said. “I think, from everything we’re seeing, I think things are going to start to get better. And at the very least, we’ll have multiple stadiums after easter. How many that is, I don’t know.”

A decision on those rounds could come as late as February next year, Prater indicated: “As far as announcing that second portion of the schedule after easter, is really, probably, mid-February, so we want to give people at least five or six weeks to plan for that, if it takes that long. Hopefully, we can get something out prior to that, but that’s our deadline, is mid-February, to get that those 13, 14, 15, 16, those rounds out.”