Retirement contemplated by Osborne prior to Salt Lake resurgence

Newly-crowned Pro Motocross champion's inspiring story to get back on top. 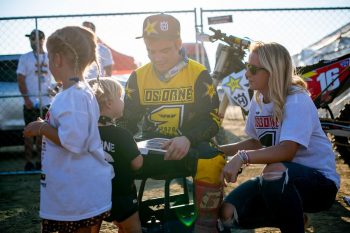 New Lucas Oil Pro Motocross 450MX champion Zach Osborne almost retired from the sport earlier this year, prior to his resurgent run in Monster Energy Supercross that led into a triumphant outdoor campaign.

Osborne suffered extensive injuries while training in the lead-up to Atlanta in late February and, following a troubled start to 2020, almost ended his career.

During his recovery, the 31-year-old father of two has revealed that he contemplated not returning to competition altogether. He was initially due to miss the remainder of the 450SX series before COVID-19 delayed the schedule mid-season.

Desire from within and encouragement from wife Brittney is what ultimately halted any premature retirement announcements and Osborne never did get as far as advising the Rockstar Energy Husqvarna team that he wouldn’t be back. Instead, his continuation has led to one of the most inspirational stories in motocross history.

“It was more just me and my wife, probably more of just me [who knew], because I was kind of afraid and it was a big decision,” Osborne explained. “It was one of those things where I needed to take some time and kind of discover if this was really what I wanted to continue doing.

“It was a massive injury that I had at the time. I had five broken vertebra and two that were 50 percent compression loss of height, a broken wrist, two punctured and partially collapsed lungs and it was a big deal for me.

“It wasn’t a scared thing, it was just that I was struggling to get going again and find the motivation. Obviously, in the end, it was the right decision and I’m grateful for the decision that I made, as well as my wife’s influence on not allowing me to quit in a hard time or in a hard spot.”

Leading into the seven rounds to cap-off Supercross over a three-week period in Salt Lake City, Osborne hadn’t finished on the podium in the first half of the season and was then positioned 14th in points after missing Atlanta and Daytona.

However, his turnaround in Utah was vast, finishing inside the top five in every main event, including four podiums and a breakout victory at the championship finals. Those results boosted him to sixth in the final standings and, importantly, injected a sense of belief entering Pro Motocross.

Osborne’s 450MX championship run was spectacular, opening the series by winning at Loretta Lynn’s 1 and 2, then sweeping RedBud 1 and also WW Ranch in a pivotal performance. In total he rode to six moto victories and four overalls this season.

It’s that type of success that will ultimately drive him further while preparing for the 2021 season, which will be the last of a multi-year contract with Husqvarna. The pair is already in discussions to extend that partnership, at least through 2022.

“The reason why I considered [retiring] was because at the time I was riding like crap and I didn’t feel like I could be in contention for wins or being relevant,” he reflected. “To know that I can do it and know that I have the bike and team to do it, it’s inspiring to me.

“As long as I have health and this is god’s plan for my life, then I’ll continue. More than anything, this is just kind of a weight lifted. The 450 championship is a pretty big deal in our sport.

“For me, it just kinda brings some validation and takes some pressure away to where I can kind of free up and ride more opening, having more fun with it. It’s more of a confidence thing than anything – I know I can do it now, so I hope to continue what I’m doing.”

The 450MX crown is Osborne’s fourth major title of his professional career, adding to his 2017 250MX championship and 250SX East series wins in 2017 and 2018. He stepped up to the premier class in 2019, finishing 14th in Supercross after missing a number of rounds and fifth outdoors.