Manufacturer switch confirmed by Craig ahead of 2021 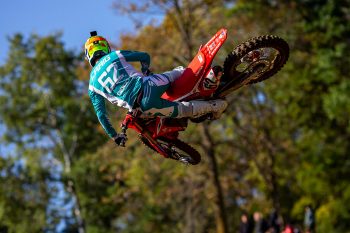 The decade-long relationship between Christian Craig and Honda will conclude following the Fox Raceway national, instead set to remain in the 250 class with a rival manufacturer in 2021.

Craig, 29, confirmed that his future is secure in the lead-up to this weekend’s Lucas Oil Pro Motocross finals, strongly linked to Monster Energy Star Racing Yamaha.

After completing a luckless 250SX West campaign with Geico Honda, Craig transferred to 450MX with Team Honda HRC in place of Ken Roczen for the outdoors and has so far impressed with top 10 form by sitting eighth in points.

While the Factory Connection team’s future is up in the air following the widely-reported departure of title sponsor Geico, Craig was already scheduled to exit beforehand and said it would be a bittersweet moment to leave Honda.

“I’m good for next year, obviously I can’t say where, but I think everyone kind of knows that,” Craig explained when queried this week. “I’ve been on a Honda for 10 years, which is pretty crazy to think about.

“I haven’t ridden a different kind of bike for 10 years, so it’s going to be bittersweet this weekend, final time riding a Honda at least for the future, but fun times and a lot of good memories with Honda.”

Craig would prefer to step up to the 450 full-time if the opportunity was there, but instead he will spend another term in 250s for both Monster Energy Supercross and Pro Motocross unless he’s called upon to step up again outdoors.

“I think every rider’s goal is to be in the premier class, 450, but unfortunately it’s just not working out in my favor this year,” he added, without revealing what team he has actually signed for.

“Rides are tough to come by – you’ve gotta be winning, on the podium consistently or showing good speed every week, so I’m working towards that. I’m just fortunate to have a ride.

“I’m contracted on the 250, but you never know… just like this year, I was contracted to ride the 250 and Kenny [Roczen] opted out of the outdoors. Whatever the team wants me to do, I’m gonna do.”