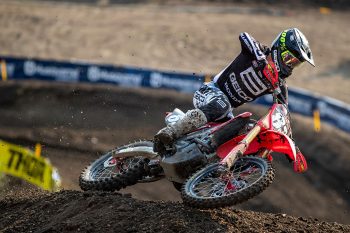 Lawrence went 6-6 for sixth overall in Colorado, but it was a controversial post from the 17-year-old on social media later that night that stole much of the attention from Cooper’s first win of the 2020 season.

“The Justin Cooper thing, I have to start by saying congrats to him,” Lawrence stated. “He kicked all our asses – I ain’t gonna lie about that. I’ve got nothing against him, it’s just the whole industry works so hard on making our sport good and getting it up at such a high level, that when you bring a dog onto the podium with the photo – instead of holding the trophy, you hold your dog – it kinda looks like a bit of a circus show.

“I love dogs, I’ve got a dog at home. For the speech, I didn’t mind the dog sitting there, it looked cute, but for the main photo I just didn’t like it that much. As you know, whatever comes to my mind, I’m gonna say it. I’m not gonna go on DM and talk behind their back, I’ll either say it to their face or I’ll express myself on social media and they can talk back.

“He can come to the truck next weekend at Pala, that’s fine. I’m old school like that, I ain’t gonna go post everything on social media and then in person not say anything. I just wanna make this sport a lot better and get bigger name sponsors into this, cos obviously that’s better for all of us to make our sport [higher].”

During the post-race press conference, Cooper said that it was a casual decision he made to take the dog onto the podium: “I figured, why not? I brought him with me, so to stick him up on the podium, I don’t think anyone’s ever done that before. It was cool, maybe not an every time thing, but since he was there and I got the win, I figured, why not?”