Podium celebrations with dog sets off back-and-forth between the pair. 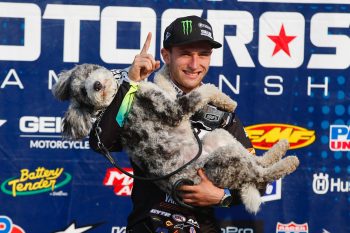 Teenage rookie Jett Lawrence and Thunder Valley 250MX winner Justin Cooper have traded barbs in an exchange on social media after the latter took his dog onto the podium in Colorado.

Cooper, 23, celebrated his first victory of the Lucas Oil Pro Motocross season in unique fashion with his dog ‘Thor’, which Lawrence appeared to take exception to afterwards.

The 17-year-old Australian Lawrence shared Cooper’s Instagram post to his story, prompting a back-and-forth between the pair, including Cooper hitting back at Lawrence’s famous donut antics on the podium at the Monster Energy Cup last year.

Lawrence initially posted, “yeah real professional to bring your dog onto the podium”, to which Cooper responded, “more professional than eating donuts on the podium”. Lawrence then wrote, “that’s amateurs mate, not pros” and it escalated from there.

“Lose your bag of donuts if you want a shot at the podium… rookie”, Cooper shot back. Lawrence questioned, “well where were you when you was 17 mate #probsbclass”, when Cooper then said, “getting a decent education because it’s *were, not was”.

Lawrence then had the final say, “LOL, sorry I don’t have Swapmoto doing my social for me”. Cooper chose not to go further from there, ending the fascinating exchange between two of the sport’s most sought-after prospects in the 250 Class.

In his first full season of Pro Motocross, Geico Honda’s Lawrence – sixth today – has fallen just short of the overall podium on several occasions and sits sixth in points, with Star Yamaha rider Cooper climbing to fourth after his breakout win earlier this afternoon.