No giving up despite violent fall in second practice – Musquin 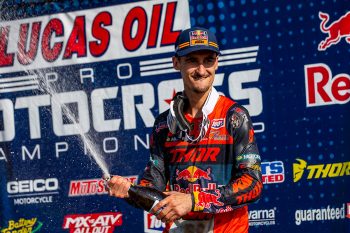 Another violent fall in Jacksonville didn’t stop Marvin Musquin from standing on the podium overall at WW Ranch on Saturday, stating that he never considered not lining up for Saturday’s motos.

The Red Bull KTM rider, who also crashed heavily at Spring Creek a week prior, went down in qualifying and was an uncertainty for the motos in brutal conditions.

However, he pressed on to claim third in the opening moto and then later, after leading his share of laps despite contact with Adam Cianciarulo, finished third again for the runner-up result overall.

“There’s no giving up,” Musquin commented. “We just go out there and try our best and see how it goes. Obviously, I could have gone out there and done a lap or two and if it was bad then maybe stop, but no, I felt actually pretty good.

“Obviously, it was a hard hit, I hit everything – my stomach, everything, but I was alright. I proved that I was okay because I was able to do two motos in the heat and be as consistent as possible and get on the podium, so that was great.”

Although his results have been some of the most consistent in the 2020 Lucas Oil Pro Motocross Championship, Musquin is now 30 points outside of 450MX leader Zach Osborne with just two rounds remaining for the season.