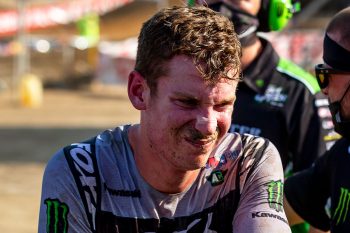 Contact between Adam Cianciarulo and Marvin Musquin has been brushed off by the pair after WW Ranch, despite Cianciarulo’s podium chances evaporating in the clash.

Cianciarulo had led the opening four laps when Musquin attempted an outside pass following the rollers, their lines coming together and causing the Kawasaki rider to go down.

It was a costly chain of events for the rookie, who has now fallen to 29 points behind Zach Osborne in the 450MX standings, as he could only recover for seventh position, placing him fourth overall largely due to his runner-up result earlier.

“I think I put myself in good positions today, I put my best foot forward and I can’t be bummed on that,” Cianciarulo commented. “I’ve had a really good past couple of weeks, so it’s easy to look at this result and be bummed out.

“Unfortunately I came together with Marvin there, it was just kind of a weird deal. I didn’t get a good drive into the rollers and he had a line, we both went for the same line – it was violent.

“I came to stop and, actually, where I got my collarbone plated earlier this year it basically caught and I couldn’t really move my arm much after that. I just had to nurse it home and I couldn’t do too much.

“That’s unfortunate, but like I said, it’s been a good couple of weeks for us and I tried my best today. I can hang my hat on that, hopefully bounce back next week and get another win.”

For Musquin, the Red Bull KTM rider was relieved to finish on the podium after enduring a high-speed fall of his own in practice. He’s one point behind of Cianciarulo in the championship with two rounds remaining.

“When I got around AC, I felt like I carried a lot of speed into the rollers compared to him and I was on the outside, then I came in faster than him and I was like, ‘let’s give it a try’,” explained Musquin.

“I know it was a bummer because we hit each other and then he went down, I didn’t, but I just felt like, like I said, it was just give it a try. It was kinda sketchy, but I feel like we’ve seen a lot of action this year already with other riders [laughs], so no surprise.”