Pit-stop gets him back on track for points in WW Ranch second moto. 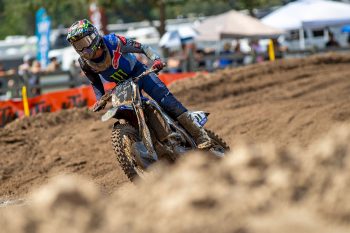 An early error on the opening lap of moto two while in second position at WW Ranch cost Monster Energy Yamaha’s Justin Barcia an opportunity to score a third podium of the 2020 Lucas Oil Pro Motocross season.

Barcia finished fifth in moto one and was in position to make it back-to-back overall podiums after claiming the hole-shot, before going down and damaging his bike. He pitted and then returned to climb into the points with 13th place.

“It wasn’t what we were hoping for at WW Ranch,” Barcia said. “In the first moto, I got a decent start and finished fifth. We made some changes to the bike for the second moto, I got the holeshot and was feeling awesome, then had a big crash.

“I had to pull in, which was a bummer, but we were able to get back out there. I gave it everything I had and fought my way back up to 13th for 10th overall. It’s not the results I wanted, but all in all, have to look at the positives. I’m looking forward to next weekend.”

After ending up 10th overall, Barcia dropped one position in the Pro Motocross standings to sixth with two rounds remaining. His lone moto win of the outdoors came at Loretta Lynn’s 2, the highlight alongside his third-place round results at RedBud 1 and Spring Creek.