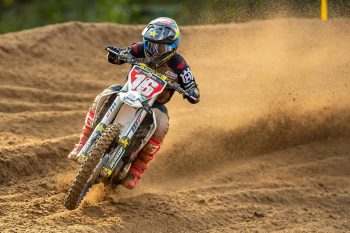 It was a nerve-racking day for 450MX points leader Zach Osborne and the Rockstar Energy Husqvarna Factory Racing Team, who came away from Round 6 of the 2020 AMA Pro Motocross Championship with 4-16 moto scores for 10th overall after valiantly fighting through a front-tire flat during Moto 2 of Saturday’s Spring Creek National.

Coming into the second moto, Osborne held a solid fourth-place finish from Moto 1 and he had high hopes of finishing the day off on the podium but Moto 2 brought a major obstacle his way. He got off to a great start in third, battling for a podium position through the first half of the race. However, the points leader felt things begin to change mid-way through the race and he spent the last nine laps in pure survival mode, adapting to his unfortunate situation. Despite a flat front tire, Osborne was able to continue on and salvage valuable points with 16th place in the second moto, where he still maintains a 15-point lead in the 450X Championship with three rounds remaining.

“It’s not the day we had hoped for but I still have the points lead and I’m still in a good spot,” Osborne said. “If someone would’ve said you’ll have a 15-point lead with three rounds to go I would’ve said sign me up! So now it’s time to fight for the goal.”

Teammates Jason Anderson and Dean Wilson will miss the remainder of the 2020 AMA Pro Motocross Championship as both riders continue to recover from recent injuries.

250MX
Coming off a big victory at the previous round, team rider RJ Hampshire carried that momentum into the opening moto as he shot off the line to capture the holeshot and early lead. He led the first seven laps of the race before getting passed by Dylan Ferrandis and he held strong to finish second.

In Moto 2, Hampshire got a seventh-place start and he battled from that position for the first half of the race but he began feeling the effects of a practice crash that took place earlier in the day with a jammed hip. He made another mid-race charge in an attempt to land on the overall podium but he re-aggravated the hip, putting him into race-management mode for the remainder of the day. He finished sixth overall with 2-11 moto scores, where he sits third overall in the 250MX Championship standings.

“The weekend started off rough, I had a practice crash in the second session and it actually upset my hip a little more than I thought,” Hampshire said. “I led half of the first moto and was feeling good but I kind of jammed it again and it was just tough after that. We managed to still get 11th in the second moto, which isn’t great, but we had a lot of speed today and I’m stoked on my riding.”

It was a tough start to the day for Jalek Swoll, who encountered a freak issue with his forks in Moto 1 that would ultimately end his race early. In Moto 2, Swoll came back with a 17th place start and he battled his way to an 18th place finish after experiencing an issue with his shoulder.

“It was kind of one thing after another today,” Swoll said. “I went into the first moto with a good start and a decent pace but I had a freak accident and broke my forks. I came into the second moto with 38th gate pick and I had a decent start but I ended up pulling my shoulder out on the second lap. It’s frustrating but we’ll get healed up and be ready to fight on home base.”

Stilez Robertson was forced to sit out for the day after hitting his head during qualifying earlier in the day. His condition will be re-evaluated before the next round.