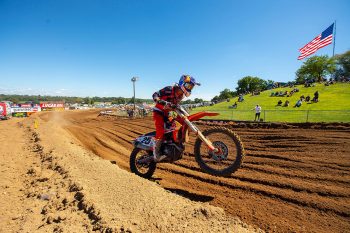 After racing his way to a second-place podium finish in Moto 1, Red Bull KTM Factory Racing Team’s Marvin Musquin came away with a fourth overall at Round 4 of the 2020 AMA Pro Motocross Championship’s RedBud I National, where he maintains second-place in the 450MX Championship heading into the series’ halfway point on Monday.

In Moto 1, Musquin got off to a good start and he put his KTM 450 SX-F FACTORY EDITION into a favorable second-place position on the opening lap. He put on a good charge to reel in race leader Zach Osborne but he wasn’t able to make a pass before the checkers, finishing 1.9 seconds back for second-place. In Moto 2, Musquin got a top-five start and he charged his way up to the podium battle early on. He began losing ground around the halfway point and he ultimately finished sixth in the moto.

Marvin Musquin: “It’s always great to be here at RedBud. Going into the first moto, I felt really good and I was enjoying it. I wasn’t too far off Zach but we were both riding well at pretty much the same speed and I couldn’t come back on him. It was a tough second moto, I felt like I was riding good and aggressive but I was never able to get around those guys. I am bummed because I did the first one really well and the second one I’m not able to do the same, so I’ll try to work on that.”

Musquin and the Red Bull KTM Factory Racing Team will take two short days off before getting back to racing with Round 5 once again taking place at RedBud MX on Monday.