Direct updates from round three of the outdoor season in Indiana. 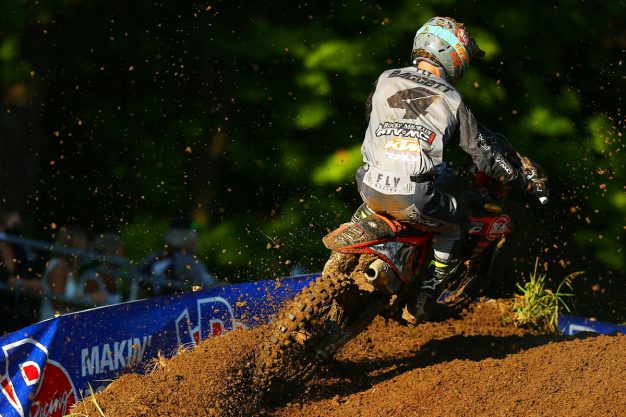 250MX moto two:
There was carnage at the beginning of 250MX moto one as Ferrandis was involved in a first turn pile-up, which also saw McElrath and McAdoo go down. Starting from the rear of the pack, Ferrandis sliced his way to third by race’s end, but it was moto winner Jeremy Martin who earned back-to-back round victories via his 2-1 scorecard. Martin’s first race win of the year was 5.792s ahead of Cooper, with Ferrandis third following late moves on Hartranft and Jett Lawrence. Alex Martin claimed sixth ahead of Shimoda, Harrison, Carson Mumford (Geico Honda) and McElrath. Hunter Lawrence improved for 11th this time out, as McAdoo could only climb to 15th and problems caused Hampshire to finish 17th. Overall, Martin stood on top of the podium from Ferrandis, with Hartranft completing the top three.

450MX moto two:
A thrilling second 450MX moto saw Tomac rebound to capture his first win of the year, clinching him the overall in the process after fending off Barcia in the closing laps. It was Osborne who took the hole-shot until Cianciarulo made a move soon afterwards and led all the way until within the final seven minutes when Tomac struck. Barcia soon followed him through and maintained pressure, but the difference remained at 1.103s at the finish despite a late charge. Third was Osborne after Cianciarulo dropped from first to fourth, while Sexton ended up right there in fifth. Opening moto winner Musquin could only manage P6 this time out, joined in the top 10 by Baggett, Wilson, Savatgy and Tickle. Anstie went down mid-moto and appeared injured, while Anderson didn’t line-up in race two due to pain in his previously-broken arm. Overall, Tomac won the round from Musquin and Cianciarulo. In the standings, Osborne leads, 13 points ahead of Musquin.