Kawasaki fill-in Sanayei out for Pro Motocross round two

Taking a week off to recover from opening round shoulder injury. 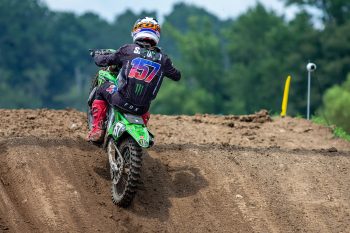 Monster Energy Pro Circuit Kawasaki’s injury woes have continued after stand-in rider Darian Sanayei dislocated his shoulder at Loretta Lynn’s 1, ruling him out of this weekend’s second round of Lucas Oil Pro Motocross.

Sanayei finished 14th in then opening 250MX moto of the season last Saturday, but a crash in the second outing saw him DNF and it’s since been confirmed that his injury will sideline him this weekend.

“Loretta’s was a tough one for me and I was just off all day,” Sanayei said. “In the first moto, I fell around 10 minutes into it and had to work my way up from 20th to 14th. The second moto I started off good, but I made a few mistakes and I just wasn’t riding at a good pace. Later in the moto, I crashed and popped my shoulder out, so I wasn’t able to finish out the race.”

With Sanayei hoping to be fit again for round three in the Ironman National, Monster Energy Pro Circuit Kawasaki will only have two riders – Cameron McAdoo and Mitchell Harrison – riding at Loretta Lynn’s 2 this coming weekend.