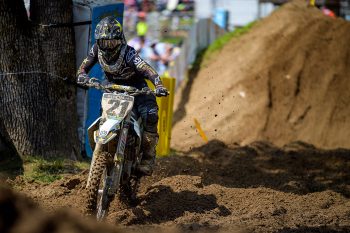 Winning the first moto of the 450MX season was a strong statement from Jason Anderson at Loretta Lynn’s, aided by a clear track as he sprinted away to victory and set himself up for the podium overall in the process.

Rockstar Energy Husqvarna’s Anderson was on the podium on four occasions in last year’s Lucas Oil Pro Motocross series and again proved that he will be up-front by earning second overall on the weekend.

Former Supercross champion Anderson worked his way into the lead on lap one of the opening encounter, going on to lead all 18 laps over the 30-minute duration for a 4.895s winning margin in a convincing effort.

“The first moto went really good,” Anderson recalled. “I got up front and I think just, honestly, a clear track [helped]. I think if anyone were to get up front like I was, I think that clear track would have helped them out and got them up there – to get to be able to take your own lines and figure it out while other guys are just getting cross-rutted, battling and stuff like that, so that was good for me.

“Second moto, I was in second behind Zach. I kind of started tightening up a little bit, so Eli went by me and I was going to try and learn from him, but I kind of blew up a little bit. With three laps to go I kind of ran into a lapper and lost third place, then I got train-rolled by all the other guys and ended up in the back, but at the end of the day, P2 overall for the first day is not bad. I’m on the podium, so I’m stoked.”

After taking victory in race one and then took the checkered flag in sixth at the end of moto two, placing him second overall behind Rockstar Energy Husqvarna teammate Zach Osborne. The series will return to Loretta’s this Saturday for the second-straight round.