Another victory for Tomac over Webb in SLC3 thriller 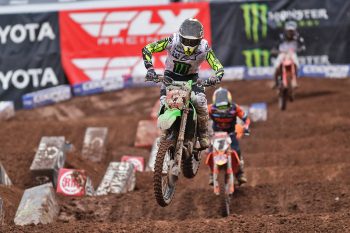 Monster Energy Kawasaki’s Eli Tomac and reigning champion Cooper Webb fought it out in Utah at round 13 of Monster Energy Supercross, with Tomac scoring a spectacular victory at SLC3.

Tomac scored his seventh win of the 2020 season to match four-time champion Ryan Dungey on the all-time win list at 34, extending his points-lead to 26 in the process.

It’s still Ken Roczen (Team Honda HRC) who sits second in the standings, but after going two laps down today with a 10th-place finish it appears his title challenge is all but over with four races to run. Webb is now 32 points in arrears.

It was Zach Osborne (Rockstar Energy Husqvarna) who led the opening lap before Webb made his way past, immediately followed by Tomac. On lap nine, Tomac took his turn at the front and from there the pair went back and forth, fighting for the win.

While Tomac didn’t have to overcome Webb in terms of the title-race, he stood up to the challenge and made his way back ahead in the final laps, holding him at bay to the finish and scoring another instrumental victory by only 1.281s.

In third was Jason Anderson (Rockstar Energy Husqvarna), a full 43.995s behind and the final rider in the field not to go a lap down. He was followed by teammate Osborne and Malcolm Stewart (Smartop Bullfrog Spas Honda) inside the top five.

Sixth was Dean Wilson (Rockstar Energy Husqvarna) a few seconds up on Justin Brayton (Team Honda HRC) in seventh, who in turn was closely followed by Martin Davalos (Monster Energy Team Tedder KTM). Next was Justin Barcia (Monster Energy Yamaha) in P9, as Roczen faded to 10th by race’s end.

Monster Energy Supercross will continue this Wednesday, 10 June, with the wet conditions of today expected to clear for the final stretch in the 2020 championship. It will also mark the first 250SX West round in Salt Lake City for this season. 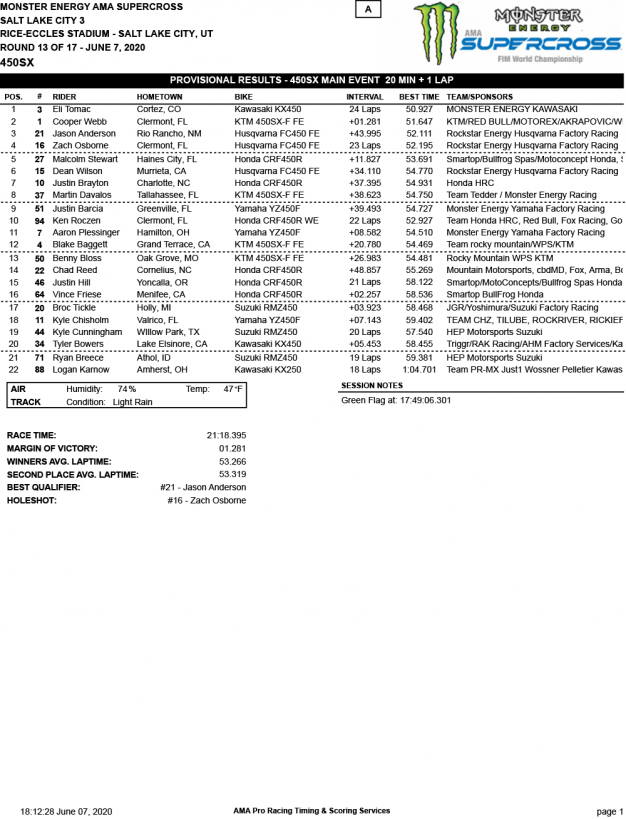