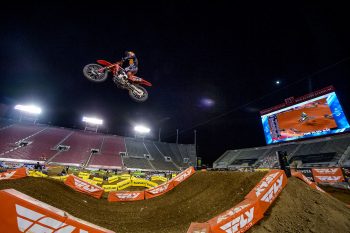 Respiratory complications have been identified as the issue for Ken Roczen on his way to an uncharacteristic fifth position at SLC2 earlier this week.

Roczen admitted directly following the race that he was in search of answers, but has now elaborated on his ongoing health dramas.

“SLC round two was not a good one for me,” Roczen stated. “I have been having breathing issues for a few months now. I got really sick in November/December that attacked the respiratory side of my body really bad.

“It has been going on for a long time and I am not able to get rid of it. I have developed a mild-asthma that I was unaware of before, but I am not sure if that is the actual issue, to be honest. Having said that, there is medication for that, but it doesn’t seem to change my restrictions.

“It is not something I talk about, because when I am out racing it doesn’t matter what issue I have – all that matters is the end result. I am always going out to do my best and push my body as hard as I can. Obviously I had to let go after just about eight minutes into the main, which is obviously not normal.

“I know that this looks bad, but unfortunately it is what it is and I am not giving up. There are still five rounds to go and I’m always down to try and do some magic! The last thing I want to do is let down the people that believe in me.

“I just thought my fans should know. To go out and win your body has to work in top notch form, but other than that, I have been feeling pretty good on the bike and am plenty fast enough to win. On to Sunday!”

The Team Honda HRC rider is now 13 points behind Eli Tomac (Monster Energy Kawasaki) in the Monster Energy Supercross championship standings with five rounds remaining, each to be hosted in Salt Lake City.