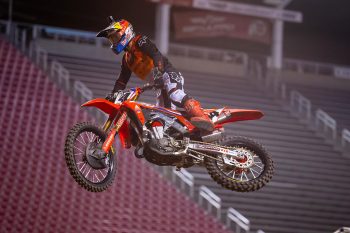 Roczen entered the final stretch in Utah only three points down on red plate-holder Eli Tomac, that margin now extending to 13 points following round 12.

After winning heat two over Tomac, Roczen wasn’t able to maintain that momentum in the final after ending the opening lap in P8. Despite a short-lived surge, he eventually crossed the finish a full 27 seconds behind winner, Cooper Webb (Red Bull KTM).

“I’m feeling good on the bike and had a good heat race, but obviously I’m having issues that prevent me from keeping it going,” Roczen explained. “I’m trying to figure it out and do my best to come back stronger. This thing isn’t over yet, but obviously fifth place is not where we want to be.

“The main goal is to try to be better and especially get a better start. I took a chance going to the very inside on the start gate and that didn’t work out. I’m going to rest, recover and I look forward to trying our best in the next race.”

Team Honda HRC manager Eric Kehoe said Roczen has to rebound for the next round, which will take place following another short turnaround on Sunday. After charging early, it appeared he lost strength

“Today was about damage control,” Kehoe said. “Early in the day things were good, practice went well and Ken’s heat race went well. We know that starts are so important and in that main event, both Ken and Justin [Brayton] were too far to the inside, got shut off and were pretty far back.

“Ken had to put in a really hard effort to battle back up into position and he struggled to maintain that same effort throughout the race. We need to work on starts and come back strong for the next event.”

It was defending 450SX champion Webb who won his second race of the season on Wednesday, as Monster Energy Kawasaki’s Tomac rode to second and increased his points advantage in the process.