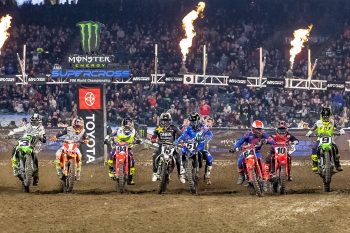 Organizers of Monster Energy Supercross continue to evaluate options in order to complete all seven rounds remaining in the 2020 championship, determined to deliver the full series as planned.

The opening 10 rounds took place prior to the COVID-19 pandemic halting proceedings, with Eli Tomac currently atop the 450SX standings while Dylan Ferrandis and Chase Sexton lead the 250SX regions.

Speaking to the Real Talk 447 Podcast hosted by Jeff Emig alongside Ricky Carmichael (embedded below), Feld Motor Sports director of operations – Supercross Dave Prater outlined the challenges presented as the entertainment business seeks to save the season.

“Right now we’re planning for multiple situations,” Prater stated during the interview. “We’re working on different budget scenarios depending on where we end up racing and what dates we end up racing on, so that’s the biggest challenge.

“The uncertainty of not knowing when things will get back to normal, we’re trying to plan for the best possible scenario to get these seven rounds in and finishing the 2020 season. The goal is to finish rounds 11 through 17 before the end of 2020.”

Feld Motor Sports announced last week its intention to complete the series later this year, which will almost certainly follow the Lucas Oil Pro Motocross Championship that’s tentatively scheduled to commence in mid-June with the Florida National and conclude in Southern California on 5 September.

“With all of the OEMs and teams it was unanimous, everyone wanted to finish the Supercross season, so that’s what we’re working towards,” he continued. “Everyone thought it was important that they get a complete 17-round championship.”

Ongoing teleconferences between Feld Motor Sports and the manufacturers involved continue to take place, gathering every Monday and Thursday to assess the ever-evolving situation. Communication with series sponsors are also continuing.

The added element of the Major League Baseball (MLB) season being delayed, as well as a looming National Football League (NFL) season scheduled to open in September, could complicate the ability for Supercross to secure traditional venues in the fall. Back-to-back double-header rounds aren’t a priority of Feld Motor Sports at this moment.

Postponements to a wide range of sporting events including the Major League Soccer (MLS) will also likely disrupt plans to host the 2020 Monster Energy Cup at the Dignity Health Sports Park – home stadium of the LA Galaxy – in October.

It’s unclear when an updated Supercross schedule will be finalized and announced, with Feld Motor Sports having to work around the revised MLB and NFL schedules when set. Once Supercross does resume, it’s anticipated it will run from mid-September through to the end of October over consecutive weekends in an ideal roster.

Despite widespread speculation that the series wouldn’t be able to be declared 10 rounds in, Prater did state that it could in fact be called now and still warrant a championship, not that Feld Motor Sport is considering that as a genuine option.