Supercross season set to resume later in the year 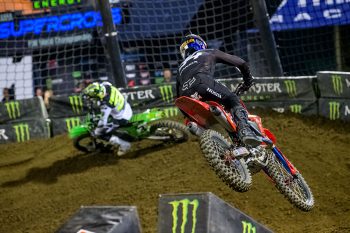 Organizers of Monster Energy Supercross have confirmed that the 2020 season is intended to continue with rounds 11-17 to be completed in the later months of this year.

This year’s championship has been suspended due to the global COVID-19 pandemic, however, it is anticipated that all rounds will take place.

Rounds 11 through to 15 had already been cancelled, with Feld Entertainment now announcing Las Vegas and Salt Lake City have also been cancelled. Instead, the remaining seven rounds are planned to take place later in the year.

Supercross is expected to resume following the completion of Lucas Oil Pro Motocross, which outlined its revised schedule late last week to be held between 13 June in Florida and 5 September at Fox Raceway.

That would likely result in Supercross recommencing mid-September and running through October over seven consecutive weekends. Locations and dates haven’t been finalized yet, according to Feld Entertainment.