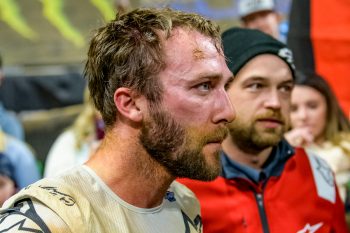 Barcia called out the Monster Energy Kawasaki rider on the podium, however Tomac responded by downplaying the incident, stating he’ll return what he’s served out on-track.

It wasn’t the only incident Tomac was involved in, as laps after the Barcia clash he came into heavy contact with Blake Baggett (Rocky Mountain ATV/MC KTM), resulting in the pair crashing. The number three rebounded in a spirited ride to salvage fourth.

“It was just battling – if I’m going to get bumped, I’ll bump back,” Tomac declared on the podium. “That’s the way it is – mine may have a been little more of a hit, but really I’m just giving it back.

“It was a tight track tonight, and that’s what leads to those situations. It was hard to make the pass stick, so you had to go inside on the bowl turns – that was the only spot tonight. I was in a hurry and Kenny was out front, it’s all I could do.

“The one with Blake [Baggett] – I didn’t mean for it to be that bad, I thought I had good momentum to slingshot from the outside to in, and he was already coming down. The tight track makes it really hard to make moves.”

Tomac is equal on points with Atlanta winner Ken Roczen (Team Honda HRC), which will see the duo share the red-plate at Daytona International Speedway this weekend in Florida.