Title contender emerges with second at the ninth round of Supercross. 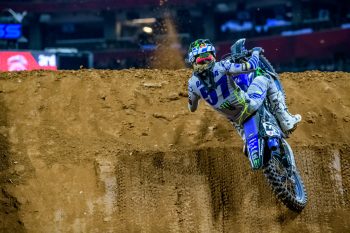 Justin Barcia has expressed his displeasure with points leader Eli Tomac (Monster Energy Kawasaki) after the pair came together in the early stages of Atlanta’s ninth round of Monster Energy Supercross.

The Monster Energy Yamaha Factory Racing rider believes he made a clean pass on Tomac, before the number three returned the favour moments later in a hard-pass manoeuvre.

Barcia later progressed through the field to finish an impressive second, moving him to just 23 points of the leader in the championship standings.

“I made a good clean pass, and he just pounded it into me,” Barcia stated on the podium. “He got me pretty good, and I was little not happy about that racing. All in all, putting that aside, what a great race – I tried to charge through the pack, I didn’t have the best start – I had a decent one in the heat race, the main event was a struggle.

“It was crazy racing and brutal track tonight – it was hard to pass, but I obviously made a lot of passes, and I had a good time. I made up some points probably too, so that’s cool.”

Tomac also made a strong charge after he crashed in a clash with Blake Baggett (Rocky Mountain ATV/MC KTM), bouncing back to score fourth with last-lap pass on Martin Davalos (Team Tedder KTM).