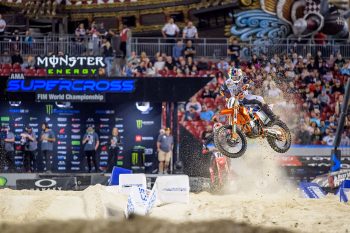 Current Monster Energy Supercross champion Cooper Webb has labelled the sand section of Tampa as ‘kind of weird for Supercross’ after finishing second in the main event.

The extensive sand section which included a left-hand turn proved inconsistent for a wide number of riders throughout the first east coast round of 2020.

Red Bull KTM’s Webb said it was difficult to see when positioned behind riders in the heat of battle and that it somewhat disrupted the track’s flow, which made for added challenges during round seven.

“It was definitely something different and when you were behind it was definitely hard to see in that super-white sand,” Webb commented. “It seemed like in Tampa they did that in ’18, but it was tricky all day.

“It was easy to make mistakes, so a little different and it kinda took your flow away. Overall, it was kind of a weird section for Supercross.”

Webb remains third in the points as the midway point of the 17-round season looms, currently 11 points away from new red plate-holder Eli Tomac (Monster Energy Kawasaki) going into Arlington on Saturday.